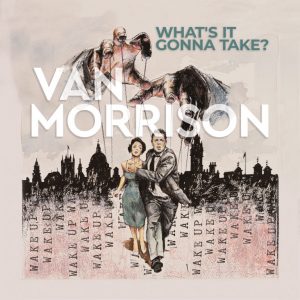 A lot of people don’t like “What’s It Gonna Take?” by Van Morrison. It’s cliche, I know, but also true that the Mainstream Media (MSM) doesn’t like anything that criticizes the current, acceptable narrative and this new album by Morrison relentlessly and repeatedly attacks what has happened to us the last two years.

Nick Hasted in his review(opens new window) wrote that the song “Can’t Go on This Way” is “ramming the conspiracy home.” In his conclusion the condescending critic writes, “Hope also remains for his art, despite its current, bizarre terminus.” Nick’s was the only professional critique I read, but there were plenty of amateurs who also disliked the album, not because of the music, which most of them were careful to praise, but because of the message. This is a very political album.

If you don’t have any problem getting the vaccine and boosters, if you’re okay with the World Economic Forum, Klaus Schwab and Bill Gates, then you will only like this album if you tune out the lyrics and absorb the music. Normally, I’d agree with many of the critiques I read that espoused that these songs are too overtly political. Usually, I prefer my music and movies to be less didactic and preachy. But not now. Not in the time we now find ourselves. The amateur critics called his lyrics “rants,” a “waste of talent,” “lyrical shallowness and hysteria,” and “stupid lyrics divorced from reality.” Morrison responds:

Continue reading here...
People keep wearing masks when we know masks don’t work. People keep getting vaccinated and boosted when we know the vaccine is not working. People fall right in line with the MSM narrative on Ukraine that may plunge us into a world war. People seem unbothered by the increased censorship and intrusion by government into their lives. Yeah, what the hell is it gonna take?

In “Fodder for the Masses” Morrison calls out the fake news:

Fill you up with fake news for their masters
Yes ma’am, that’s exactly what they’re after
Don’t even want you to share some common laughter
Just want you to keep on following their rules like a fool

We all have enemies and it is not our neighbor down the street who adheres to a different political viewpoint. The enemies we all have are our governments, the elites, the bankers and the globalists. They want us divided, attacking one another while they comfortably watch from their yachts and mansions. In “Can’t Go On This Way” Morrison calls these people out by name:

That has been the most disturbing thing for me: the number of people not bold enough to say “no.” I’ve written it before as have many others, but we no longer have to wonder how it all happened in Nazi Germany. Too many people all across the globe are willing to follow the rules with very little thought or consideration of the consequences.

“Fighting Back is the New Normal” calls out those who are not actively engaged. I think of doctors who have chosen careers over their obligations to their patients, people blindly complying by wearing masks and taking the jab, parents who keep their kids in schools that require masks and shots. Morrison sings:

Fighting back is the new normal
Gotta take a tip from the French
Fighting back, absolutely essential
You gotta stop sittin’ on the fence

There are many more great lines in this album. The first 10 songs stick to the plight of what our nation and world have endured and continue to endure up to this day. If I have one criticism, and it is minor, it is that the last 5 songs, of this 15 song album, take a different turn. It’s not that they are bad songs, they’re not, but for me they break up the continuity of the album. On “Absolutely Positively the Most”, the eleventh song, I kept waiting for the COVID virus to break through again. It never does. I suppose I should be grateful.

Some have said the first 10 songs are repetitious and they are, but they have to be. What we are facing now is unprecedented. Not to speak about it, which is the preference of some of my friends and family, is not the answer. We must speak out, if only in our small circles. It may be that millions and millions of us speaking out in our small realms of influence is what will turn the tide against the despots we now face. We all need to be “Dangerous”:

I must be getting close to the truth, alright, alright
Really, I was just looking for the evidence
I’ve been asking for it, for over a year

I was just asking’ ’em for the evidence
I’ve been asking ’em now, for over a year

Somebody said, well, I’m dangerous
Well, I must be getting, getting close to the truth