This bill went into effect today (January 1, 2023). An assault on freedom and free speech.

For those of you in California, I will be continually updating this page with the most recent information I find just below the History table.

On AB 2098 attorney Richard Jaffe had this to say(opens new window):

My view was and continues to be that AB 2098 will never go into effect because some court is going to enjoin its enforcement before it goes into effect in January. The issue got a little more complicated based on a Ninth Circuit decision a few weeks ago. However, I am still convinced that the Supreme Court and lower courts will not allow a medical board to restrict, interfere or sanction a physician for providing information to a patient, even if that information is against the current mainstream Covid narrative.

I follow my doctor on Twitter. He’s one of those rare doctors who is speaking out. He reposted some things from other doctors who are preparing for this bill (if Newsom signs it…most likely he will) by getting licenses in other states. I think there will be a mass exodus of good doctors if this bill passes and we will be left with doctors who are willing to do what they are told. My doctor recently tweeted:

Where should all the doctors fleeing political persecution in CA end up? Any space in Arizona for us?

After Evan Low presented his bill, most of the comments both in the assembly room and on the phone were in opposition to the bill.

Holden said something like “B roll call” at the conclusion which means, from what I could find online, that the bill passed with the support of only the majority party, in this case the Democrats.

This is an excellent article by Jay Bhattacharya, one of the authors of the Great Barrington Declaration, about the bill:

Here is what was deleted:

(b)The board shall consider the following factors prior to bringing a disciplinary action against a licensee under this section:

(1)Whether the licensee deviated from the applicable standard of care.

(2)Whether the licensee intended to mislead or acted with malicious intent.

(3)Whether the misinformation or disinformation was demonstrated to have resulted in an individual declining opportunities for COVID-19 prevention or treatment that was not justified by the individual’s medical history or condition.

(4)Whether the misinformation or disinformation was contradicted by contemporary scientific consensus to an extent where its dissemination constitutes gross negligence by the licensee.

This is the amended text:

(b) Prior to bringing a disciplinary action against a licensee under this section, the board shall consider both whether the licensee departed from the applicable standard of care and whether the misinformation or disinformation resulted in harm to patient health.

How is this going to be determined? What does departing from “the applicable standard of care” mean? Well, again, I think we know. The latter statement would apply to many doctors who have pushed the vaccines on people, particularly younger people, who did not need it and then suffered adverse effects, but again, we know this is NOT how it would be applied.

Also note that “Misinformation” and “Disinformation” now have a different meaning. How in the hell will anyone be able to determine number 4? Though the powers that be would love to be able to read minds, as far as I know that is not possible yet.

From the Sacramento Bee:

“These licensed physicians possess a degree of public trust, a high degree at that, and therefore must be held to account and therefore have a powerful platform in society, whether or not individuals recognize it or not,” Low said. “And so the spreading of misinformation, of inaccurate COVID-19 information, contradicts the responsibility and threatens to further erode the public trust in the medical profession and puts all patients at risk.”

What is always absent in these articles is the definition of what misinformation is. So what is it Evan (Censor Doctors) Low?

Good article at The New American. Here are some quotes:

According to the bill, “misinformation” is the spread of information that denies the “safety” of vaccines.

Steve Kirsch weighs in on the bill:

In the meantime, California wants to ensure that no doctor can question whatever the government says

California just introduced a bill that would enable medical boards to take away the license of any doctor who spreads “COVID-19 misinformation.” This is a tacit admission that they can’t win on the facts, so they have to use threats and intimidation to keep the truth from emerging. Their only weapon is censorship….

They define COVID-19 misinformation as anything going against the government narrative.

In short, they want to take away the free speech rights of doctors who would no longer be allowed to question anything the government says. After they do that, citizens will be next.

As if AB 1993 wasn’t bad enough, now doctors in the state of California are being targeted with a new bill introduced by another of California’s useful idiots, Democrat Evan (Censor Doctors) Low. The bill is very bad. Very bad. It is a censorship bill to allow misinformation promulgated by the CDC, Fauci and our governments to be spewed to the world uncontested. More specifically, it muzzles doctors who disagree with the CDC narrative. Whatever happened to open debate? I keep forgetting, we don’t live in a free country anymore. The introduction to the bill says this:

This bill would designate the dissemination or promotion of misinformation or disinformation related to the SARS-CoV-2 coronavirus, or “COVID-19,” as unprofessional conduct. The bill would require the board to consider specified factors prior to bringing a disciplinary action against a physician and surgeon. The bill would also make findings and declarations in this regard.

The bill itself is full of misinformation. There is this:

(b) Data from the federal Centers for Disease Control and Prevention (CDC) shows that unvaccinated individuals are at a risk of dying from COVID-19 that is 11 times greater than those who are fully vaccinated.

The CDC may be showing that, but it is not true. See COVID Resources right here on The Asylum.

There is also this bit of misinformation:

(c) The safety and efficacy of COVID-19 vaccines have been confirmed through evaluation by the federal Food and Drug Administration (FDA) and the vaccines continue to undergo intensive safety monitoring by the CDC.

This is again, not true. Why do you think they have to write a bill like this? When has it ever been the policy of our country to outlaw free speech by doctors? Why for this? Red flags, anyone? The evidence that has been coming out is overwhelming with this “vaccine”: Don’t get it. Most people do not need to take the risks involved with the jab. Again, see COVID Resources right here on The Asylum.

Even if you don’t know any of the data against the jab or data supporting off-label treatments like Ivermectin and Hydroxychloroquine ask yourself why is debate not allowed in the Mainstream Media? Why is a bill like this written? What happened to robust, scientific debates between those with differing views? Steve Kirsch can’t get anyone to debate him openly. He’s gone so far as to offer 1 million dollars…and that person doesn’t even have to win the debate. Just show up, then go buy a house.

This is probably my favorite statement from the bill:

(e) Major news outlets have reported that some of the most dangerous propagators of inaccurate information regarding the COVID-19 vaccines are licensed health care professionals.

This is your proof? Are you freaking kidding me? Some woke journalist “fact-checker” is a better source of information than Dr. Robert Malone, Dr. Pierre Kory and a host of others? My God Man! Get a clue.

This is a bad bill. It’s draconian. It’s authoritarian. It goes against our free speech rights and the right of doctors to follow the science and their consciences. I will continue to follow its progress on this page. 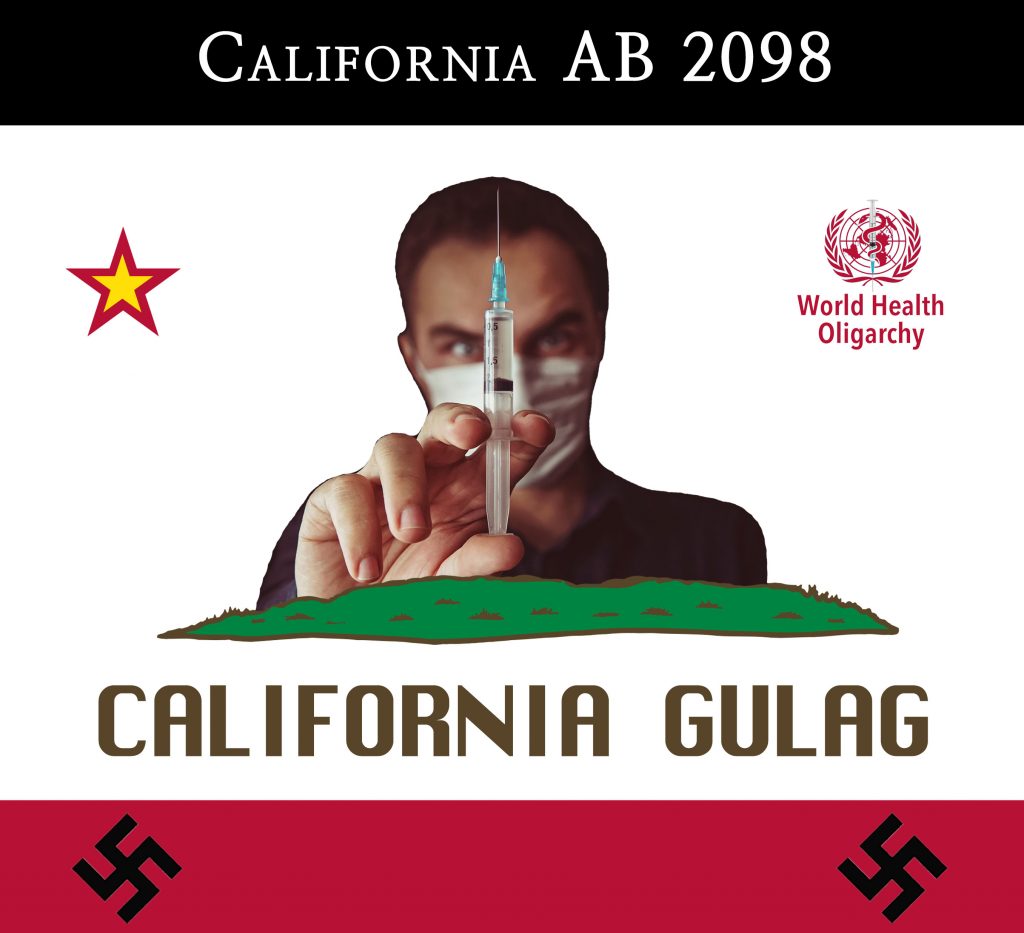 Dr. Meryl Nass writes, as reported in The Defender:

“However, we have a First Amendment and often state laws that explicitly protect free speech.

“The California legislation, when signed, will be a first-in-the-nation attempt to legislate around the First Amendment and criminalize free speech.

“This will legalize what has already been carried out by what I would call ‘rogue’ medical boards who are unaware of our constitutionally guaranteed rights.”

As reported in The Defender, Robby Soave in an article for Reason wrote:

“Science is a deliberative process, and medical professionals need to be allowed to dissent from mainstream orthodoxies and challenge dominant perspectives. Patients deserve expert care, but it’s unreasonable for the government to compel ideological conformity in this field.

“Besides, the state has shown no particular aptitude for discerning what constitutes genuine misinformation. On the contrary, government actors have frequently instructed social media companies to be wary of perfectly legitimate points of view.”