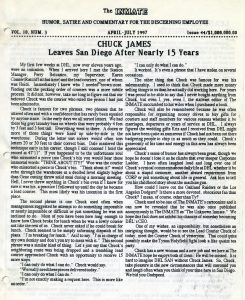 Chuck approached me recently and asked if I might be able to dig up some old INMATES for a DHL get together he is having. Dig them up? Are you kidding me? As the only claim to fame I’ve had in my paltry 61 years here on this earth, no digging was necessary. All I had to do was look under my pillow and pull them out. Just kidding. I keep them under my bed in a safe. Well, maybe not a safe, more like a plastic box and maybe not under my bed but out in the garage…somewhere, right next to my copies of the DHL Checkmate, some old DHL Point Checks and a worn out pair of DHL shorts with that cool red laser stripe.

In all seriousness (it’s hard, trust me), I have not looked at these INMATES in years. I was genuinely surprised at how many issues there are (45). Didn’t I have a life back then? Don’t answer that. Some of you may recall that I wanted to be a writer (I’m a web developer now, so you can see how well that worked out) so The Inmate was a way to practice my craft but more importantly is was a way for me to vent and hopefully vent in way that many of you could relate to. I did thoroughly enjoy writing The INMATE. And I clearly had some issues back in the day! Okay, still have some issues, but I love being 60+ because you are allowed, almost expected, to have issues.

In its heyday SAN managers were sending The INMATE to other DHL station managers and in some cases their superiors, which, in retrospect, probably wasn’t the best idea. Some of you may not remember or even know that at one point I thought I might lose my job over publishing The INMATE. I have our station manager, Mike, to thank for that not happening. He was a little concerned for his job too. But you know things are serious when the station manager comes to you in the morning and says he’s going to ride with you to talk about something. That was the time The INMATE made it all the way to the CEO’s desk. I think, secretly, I was hoping they would fire me. I did get my wish…eventually. Whoops, excuse me, we were “laid” off. Not bitter at all.

I printed The INMATE on a dot matrix printer and then made copies at the station. I was eventually told I could not make copies at the station, so I made them on my own time and with my own money. I found two issues that were never printed. I’m not really sure why. Maybe I was told it might be good idea for me to quit doing that (I have a vague memory of that). I also had decided to try to take The INMATE online with the website you are currently on: The Corporate Asylum. I wrote here using the byline, The Inmate.  I was hoping it would catch on and I could make a living at it. Again, I’m currently a web developer so you can see how well that worked out.

In any case, I have thought about putting all these online for years and after Chuck approached me, this seemed like a good time to do it.

I do hope it brings back some good memories and I hope it makes you laugh…even if just a little. I worked for DHL for 17 years. No doubt we all have stories to tell and many that we have forgotten.

I didn’t really like working at DHL, but I enjoyed working with all of you.

Glen Draeger
A.K.A. The Editor of The INMATE
February 2019