I came across this article from a friend who wrote:

Bret is a conservative columnist that absolutely hated Trump. His thoughts are pretty interesting and the fact that he was able to write this and have it published in the New York Times where he is a columnist is interesting.

I had not planned on writing anything about it, but another friend of mine, after I told him about the article, said, “I’m glad you read it so I didn’t have to waste my time.” So, I thought, yeah, I don’t want that to be wasted time. So here I go:

I did not see anything interesting in the article at all. I found it a telling piece(opens new window) by someone who wants to appear as if he now truly understands Trump voters because of his knowledge and self-reflection, but like so much of the current Republican party, it’s just smoke and mirrors and the mirrors break and the smoke dissipates long before the end of this fake apology.

In the beginning Bret tells us how he excoriated people who supported Trump in the 2015 election. His exact words were: “If by now you don’t find Donald Trump appalling, you’re appalling.” Bashing Trump and his supporters is the best way to establish yourself as an enlightened conservative and no doubt Bret’s liberal buddies told him how brave he was to hold such an enlightened view. “Hey, Bret, let’s get a drink after work!”

Appalling? That’s close to being a “deplorable.” I prefer “deplorable,” but I could probably get used to “appalling” too. It’s always good to have a backup. But I’m being hard on Bret, he used this example to assure us that he has changed, that he no longer thinks of us as appalling. Whew! I was worried, ready to lose some sleep tonight. If a New York Times columnist thinks I’m appalling, even in the past tense, I must be a terrible person, intellectually deficient and on the couch until 1 a.m. watching Last Man Standing reruns.

Continue reading here...
Bret admits that he probably did more to help Trump than to hurt him. He writes, “Telling voters they are moral ignoramuses is a bad way of getting them to change their minds.” You’re kidding? Did you know that? I gotta remember that one. It’s probably okay to think they’re moral ignoramuses, just don’t tell them that. Subtlety is the key.

Bret is careful to tell us that he saw exactly who Trump was: “I saw a bigoted blowhard making one ignorant argument after another.” We lowly Trump supporters just didn’t have, apparently, the intellect to see Trump’s dark side. We saw a guy flipping off the establishment, well, because, that’s about the extent or our intellectual capabilities. “Take that, Hillary!” One interesting thing, among so many interesting, revealing things in this article, is that Trump supporters are mostly poor, mostly in the “unprotected class.” Those poor Trumper victims! How can Bret help them?

I’m sure lots of us were in the lower classes, but a lot of us were not. A lot of us were in the same social strata where Bret resides. But he attributed Trump’s appeal to a bunch of angry people, angry at what the system had done to them by keeping them down and struggling. Angry that they had been betrayed. And then good ‘ol Bret has this to say:

Anger can take dumb or dangerous turns, and with Trump they often took both. But that didn’t mean the anger was unfounded or illegitimate, or that it was aimed at the wrong target.

See that? We’re still dumb, making stupid decisions because we’re ruled by our anger, not logic or rationality. Let’s face it, how could any logical or rational person vote for Trump? Inconceivable!

But, apparently, we’re not all stupid and ruled by our emotions:

For every in-your-face MAGA warrior there were plenty of ambivalent Trump supporters, doubtful of his ability and dismayed by his manner, who were willing to take their chances on him because he had the nerve to defy deeply flawed conventional pieties.

I’d really like to see a definition of an “in-your-face MAGA warrior” because I have a sneaking suspicion that Bret, with his New York Times gig, would put me, and a lot of you reading this, in that camp. You know, I need to apologize for that, that’s just not true. I’m not being fair. Likely, there are not a lot of you reading this. Probably just a couple of my friends and my Mom in heaven.

Anyway, to some degree Bret is right. I called myself a reluctant Trump voter back in 2016. But what Bret and his ilk don’t seem to understand is that after us “ambivalent” Trump voters got a taste of a Trump presidency, we were all in. All in. 100%. I guess Bret missed that part.

Bret does get one thing right in this following paragraph, but don’t worry, it’s only a momentary lapse of his usual clarity and insight.

Nor were they [Trump voters] impressed by Trump critics who had their own penchant for hypocrisy and outright slander. To this day, precious few anti-Trumpers have been honest with themselves about the elaborate hoax — there’s just no other word for it — that was the Steele dossier and all the bogus allegations, credulously parroted in the mainstream media, that flowed from it.

I’m speechless. Well, on here, I’m always speechless because I’m writing, but metaphorically speechless. Okay, not really. See, I’m lying again. I wonder when ol’ Bret came to this realization? My guess, having read everything that came before it, is that he only came to this view when he had no other choice. I’d be willing to bet that ol’ Bret (and I’m not going to research this because I really have no interest in wasting more time with this guy) was piling on with the rest of them when it suited his needs and when it became expedient to make a change, he did so. Just a guess.

But then it all goes to hell, not that we weren’t already there, but this is a lower level of hell. The last three paragraphs explain where Bret is today. It looks a lot like where he was yesterday. Eerily similar.

A final question for myself: Would I be wrong to lambaste Trump’s current supporters, the ones who want him back in the White House despite his refusal to accept his electoral defeat and the historic outrage of Jan. 6, 2021?

My same friend wondered how it was that this conservative (conservative?) was able to be published in the New York Times. Here’s what I responded to him:

—, this is why they allowed this guy to write in the NYT. As long as you toe the line that there was no election fraud and you still hate Trump….you can be part of the cool crowd.

If Bret had supported election fraud or had even some doubts about the “historic outrage” he’d have been picking up trash (unfortunately, not masks) on 5th Avenue. But then Bret answers his own question:

Morally speaking, no. It’s one thing to take a gamble on a candidate who promises a break with business as usual. It’s another to do that with an ex-president with a record of trying to break the republic itself.

This is ludicrous. Ludicrous! The only people trying to break the republic at this point is the Biden cartel. So, we are right back where we started. If you support Trump now good ol’ Bret has every right to lambaste you. Might he call us appalling again? Maybe deplorable? No, we have nothing to fear. Though Bret realizes that we are now supporting a man who was “trying to break the republic itself,” Bret is also a kinder, gentler soul.

But I would also approach these voters in a much different spirit than I did the last time. “A drop of honey catches more flies than a gallon of gall,” Abraham Lincoln noted early in his political career. “If you would win a man to your cause, first convince him that you are his sincere friend.” Words to live by, particularly for those of us in the business of persuasion.

Bret wants to be our friend. Well, maybe not really our friend, he just wants to convince us that he is our friend. Once he does that we should be easy prey for the shining light of truth that Bret Stephens will so graciously bestow upon us. This is the view of a typical elite: I have the truth and these poor people can’t see it because they are victims of a system that has betrayed them, but once they are comfortable with an intellectual like myself, once they see that I only want to help them out of their depravity, they’ll see the light.

Look, I don’t care what Bret thinks about Trump supporters or Trump or who he is going to vote for. Who cares? It is the blatant condescension of this article that offends me. My guess is, Bret doesn’t even realize he’s being condescending. My friend didn’t realize it either.

The last sentence of his piece slays me: “Words to live by, particularly for those of us in the business of persuasion.”

It used to be that journalism was about reporting the facts of an event and letting the people decide what to think. Journalism was about investigation, sometimes even undercover investigation to get to the actual, real facts, you know, that thing called The Truth. But Bret has inadvertently come out from behind the curtain. Are journalists reporting the truth? Who would want to do something so pedestrian as that? Journalists want to persuade you to their way of thinking. The Truth has nothing to do with it. Theirs is now the art of persuasion.

Most journalists are propagandists.

At least they’re good at something. 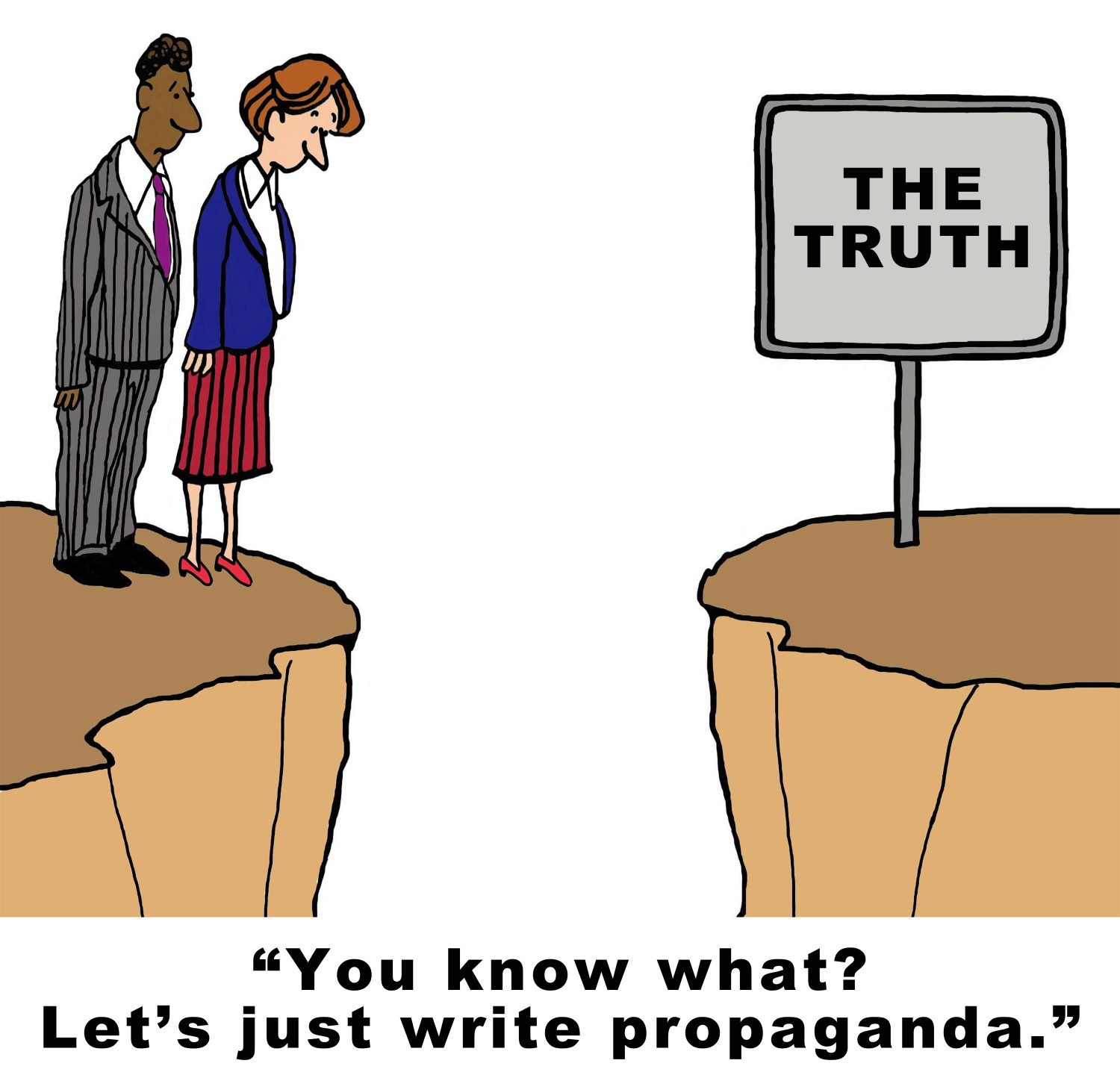