Our present activities are that we're building an army of the awakened and we are taking over precinct strategies, we're taking over election boards, canvassing boards with volunteers called American citizens many of whom have served their country or are the children of people who have served their country. Patriots, they're called. And we're doing it.

So much is happening now that it can be overwhelming:

This is all by design. They stole the election in broad daylight and they have no intention of ever giving control back to those who would implement policies that benefit regular people, particularly deplorables with unacceptable views. The elites and most of our government officials do truly believe they are better than us. They want us to feel so overwhelmed that we throw up our hands, give up and give in.

What can we do? How do we fight this? More importantly, how do we win? Certainly, massive civil disobedience is a necessity. If even just a small, dedicated percentage of us refuse to wear masks if it’s mandated again, what can they do? Say it’s 10%. Here in the U.S. that’s 30+ million. Seriously, what are they going to do? Same with any proposed lockdowns. Same with the fake vaccines. Same with gun grabs.

The problem is that we are now in a time when it really matters if a lot of people resist all at once. This decision whether or not to speak up makes the difference, when it scales, between freedom or servitude forever.

But what about something else? Something beyond civil disobedience? Some idea, some something that just has not occurred to anyone yet? Or something that has, but for whatever reason catches on fire in ways it never has before? I will freely admit that most likely the answers are the simple things: get involved in any way you can, speak up and do not comply. Above all, do not comply. Continue on the course of pursuing election integrity, getting involved in school boards, running for office, exposing big pharma, in short, becoming activists for freedom using your unique talents.

Still though, one of the things I think about is the collective wisdom of millions of people, the ability of groups of people focused on a single goal to accomplish that goal in ways that a single person would never be able to. I’m not talking about a corporate committee or an official group of people who have the uncanny ability to stymy real solutions and creativity and who lean toward power and authoritarianism as their best ideas. We are all too familiar with this over the last two years. I’m thinking more of individuals connected in ways they never have been before via the internet. Think open source, social media and websites.

The internet is both friend and foe, but we should use it to our advantage when we can. “Shrewd as serpents, innocent as doves.” What might we collectively come up with? What might we collectively achieve? I don’t know. Would it involve the internet or something else? Consider what is happening with the Pfizer documents through the efforts of Dr. Naomi Wolf, Steve Bannon’s War Room and thousands of volunteers:

The heroic efforts by Dr. Naomi Wolf of the Daily Clout and Steve Bannon’s Warroom volunteers might one day be widely regarded as the single best example of citizens using the Internet to defend themselves against tyrannical authority figures. Consider what they’ve been able to accomplish, along with other huge warriors in this battle, that would have been literally impossible a mere 20 years ago. There are currently 3,000+ volunteers simultaneously poring through tens of thousands of pages of internal documents of the organization that created and pushed the most rapidly distributed drug in history onto an entire population.

What else could the collective wisdom or maybe just the practical ability of the brain power or actions of thousands or millions accomplish when unified to achieve a common goal? What would the goal be? Freedom? Dethroning the elites? The restructuring of our governments?

Much of the point is that the complete set of answers is something like a reorganization of the maze in which the whole tribe participates. We need to allow for the powerful forces of emergent organization, and that involves the whole tribe, from the ground up.

Sometimes I think about brute force attacks on websites (I’m a web developer). A brute force attack keeps trying millions and millions of passwords until one works. There is no fancy Mission Impossible algorithm that figures it out on try number three. Maybe it uses a list, maybe it uses an algorithm or a program to go through all the possibilities, but in the end, it just keeps trying passwords until one works. Trial and error. How would this manifest itself in our situation?

I’m not sure, but for the sake of an example, there are a lot of people who are writing books about the last two years: Naomi Wolf’s The Bodies of Others(opens new window), Robert Malone’s Lies My Gov’t Told Me(opens new window), Mattias Desmet’s The Psychology of Totalitarianism(opens new window) and many others. What if 50,000 people wrote a book? Many of them would have to self-publish, but what if one of those books struck a cord with the world populace in a way that no other book has maybe because the author had never written a book before or for some other reason?

Or maybe thousands of artists painting a statement.

Or thousands of amateur comedians telling political jokes on youtube or rumble.

Or maybe you just stand on the street corner crying out for some sanity in this crazy world and some 12 year-old films it and it goes viral and the whole, ugly system is dismantled by Christmas or at least by New Year’s, February at the latest.

Or maybe it will have nothing to do any of these things. Maybe it would be completely divorced from the internet and technology. Maybe that would be its power.

Maybe we just overwhelm the system with sheer numbers of world citizens who are fed up and involved.

I don’t know, as my son would say, I’m just spitballing here.

I’m not just suggesting some meme, essay or whatever that goes viral and that we all know about and share with our friends and get a good laugh or say, “Wow, that’s really good.” I mean something that causes real change. Maybe it is able to open the eyes of those blinded by “mass formation,” maybe it motivates people to action who would have never otherwise acted. Is this just the dream of a ridiculous man?

One evening when I was particularly frustrated with what is happening in our country I was trying to come up with some idea to contribute. I literally had my hands on my head. I wanted a great idea that would cause change. In that moment The Asylum’s “Never Comply Campaign” popped into my head. It felt kind of inspired. I was excited about it. My wife liked the idea. In the coming weeks I posted some posters here and on social media. I hoped it would catch it on.

It did not catch on. You know what? I don’t care. I liked the idea, I tried it and I will still add posters in the future. It probably won’t amount to anything. So what? I’ll try something else down the road that I think is a good idea. But what if 100,000 or a million other people were trying their ideas? Who knows, maybe they are. One of us is probably going to hit on something, right? Or maybe a dozen of us will. Or maybe it would just be the accumulation of all those ideas or events that would amount to something.

This website was an idea in late December of 2021. I wanted to help…somehow. I hate the feeling of just waiting around to see what happens in a system that I have no control over. You know what? I get about 25 visitors a day. Sometimes up to a mind-boggling 100 a day. Nothing earth-shattering.

But ultimately, earth-shattering is not required. It is more likely that the unseen actions by all of us nobodies will add up to something magnificent. It is the acts of millions of us that are required.

…for the growing good of the world is partly dependent on unhistoric acts; and that things are not so ill with you and me as they might have been, is half owing to the number who lived faithfully a hidden life, and rest in unvisited tombs.

What I Do Know

I don’t want to be misunderstood. What is most necessary is to live a good, decent and moral life. We are seeing the degradation of our society: the break down of the family, the normalizing of mental disorders, the denial of real science, attacks on what make us truly human, might makes right and many, many other things purposely perpetuated by those who have no morals or ethics.

It is no exaggeration to say that these coordinated offenses, orchestrated by government in lockstep alliance with tech and pharmaceutical companies and the dominant media, represent an evil we had never seen before in human history.[emphasis mine]

– Naomi Wolf, The Bodies of Others

So be a good parent, a good husband or wife and a good friend. Don’t lose the most important things trying to save the world. Live genuinely and truthfully. In my review of The Power of the Powerless by Václav Havel I ended with this (thanks to Havel’s ideas):

No matter the consequences, you reject the lies and live within the truth.

This is the power of the powerless.

This is less glamorous than the possibilities I wrote about above, but it is necessary as a foundation for anything else that we do.

Ready for an adventure? Let’s save the world. 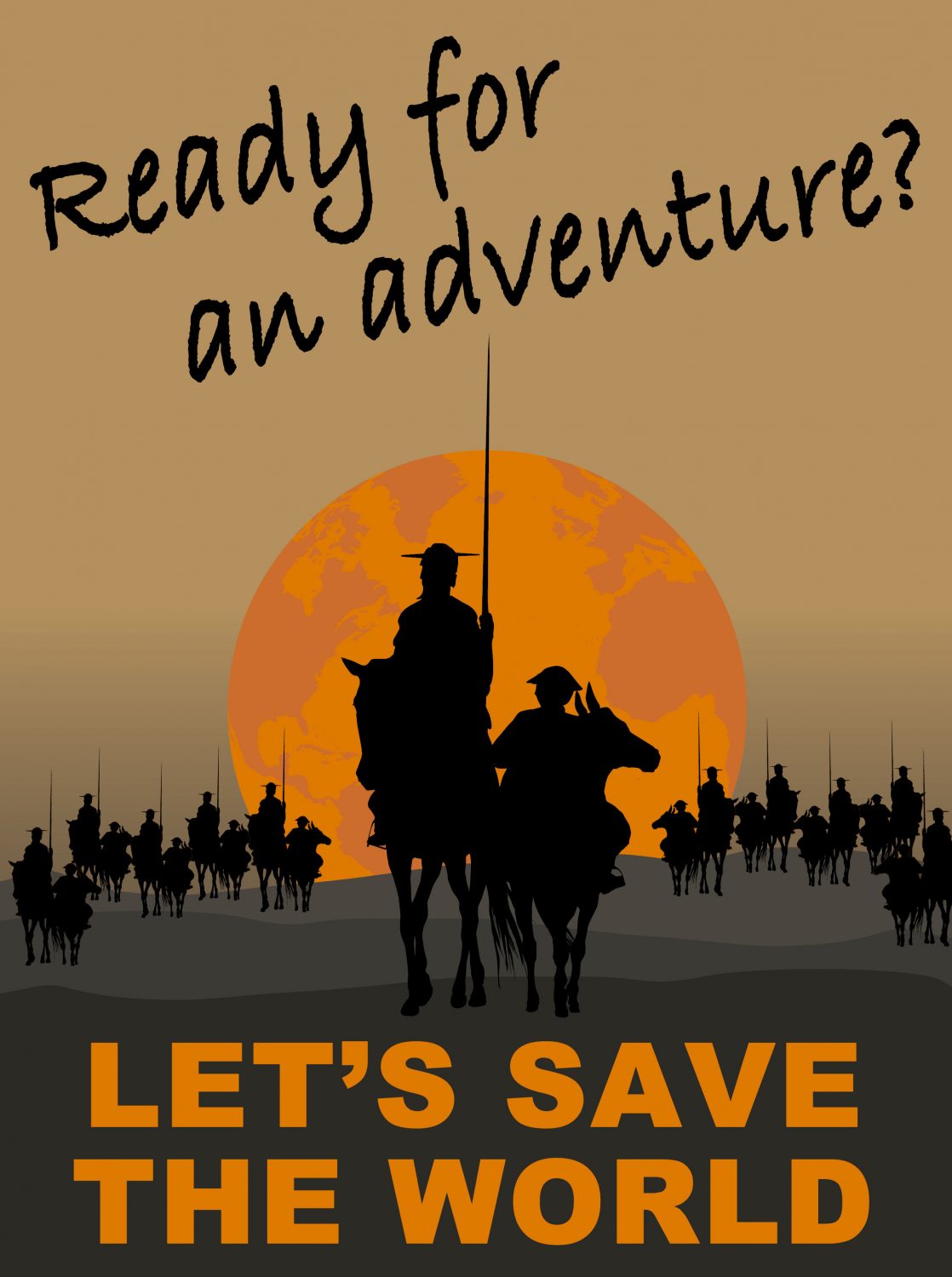 Ready for an adventure?

Let’s save the world.