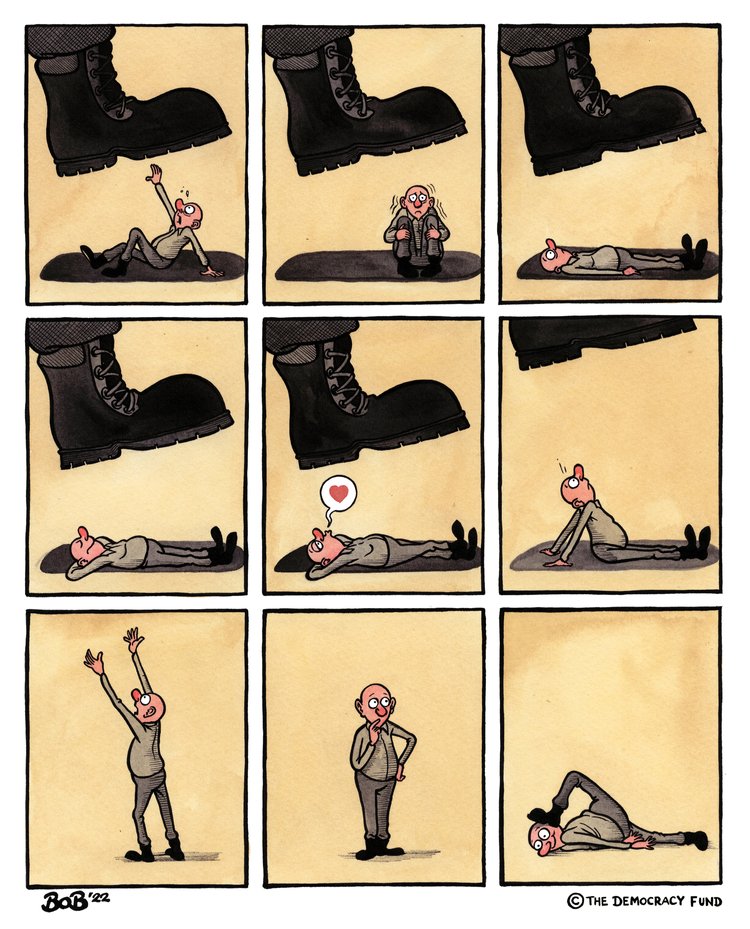 Me and My Boot by Bob Moran. Used by permission. View or Buy Print.

They want you to say it.

If you say it, they’ve got you.

And once they’ve got you, they’ll try to get you to say something else. It will never end.

“Men can get pregnant.”

Everyone and I mean everyone knows a man cannot get pregnant. We all know it. Conservatives know it. Liberals know it. Progressives know it. But if they can get you to say it, they’ve got you. If they can get you to hesitate when asked, “Can a man get pregnant?, they’ve got you and you will know it. Why? Because you know what you’re saying is not true and you know you’re saying it because they want you to say it and every time you say it you give up your independent thought and will to someone else. And eventually….you’ll believe it.

I know a man who now calls his brother, his sister. “My sister…” he’ll say. He knows his brother is not his sister and yet he’ll continue to call his brother, his sister. A part of him must know that he is being ruled by someone else, that he is being forced to say something that he knows is not true. But he is not being forced. He is complying to their will and he knows it. He does the bidding of the totalitarians for them…willingly. The boot is inside his brain.

The more this man and woman repeat these untruths the easier it will be to repeat some other untruths that they are supposed to believe. They may not say it or believe it right away, but the machine will keep repeating and repeating and repeating it, just as it did that his brother is now his sister and her girlfriend is now her husband. Finally, they’ll say whatever it is the totalitarian state wants them to say. It could be anything:

That’s the important thing. In The Power of the Powerless Václav Havel writes:

If the main pillar of the system is living a lie, then it is not surprising that the fundamental threat to it is living the truth. This is why it must be suppressed more severely than anything else.

Havel writes of a fictional man, a greengrocer, who begins to live the truth:

He begins to say what he really thinks at political meetings. And he even finds the strength in himself to express solidarity with those whom his conscience commands him to support. In this revolt the greengrocer steps out of living within the lie. He rejects the ritual and breaks the rules of the game. He discovers once more his suppressed identity and dignity. He gives his freedom a concrete significance. His revolt is an attempt to live within the truth.

In “Live Not By Lies” Aleksandr Solzhenitsyn writes:

…let us refuse to say that which we do not think.

He says more after that, but that is truly the crux of the matter: refuse to lie. Many of our doctors, succumbing to the pressure of medical boards and the State-Sponsored Narrative, are not doing this. They are living within the lie. Eventually, and probably this is already the case with many of them, they will begin to believe the lies they have been asked to repeat.

The Conservative Weekly reports: “Marco Rubio Say’s[sic] “Only Women Can Get Pregnant”, Labeled as “Factually Inaccurate.” He was “fact-checked” by The Recount, an organization I have never heard of before. They wrote this:

“Locked in a tight race with Rep. Val Demings, Sen. Marco Rubio (R-FL) trots out a transphobic attack on the CDC for using the term ‘pregnant people.’

‘Pregnant men … I can assure you that’s never happened,’ Rubio says, which is factually inaccurate.”

There you go. And if the “fact-checkers” checked it, they must be right.