For the hard idea of truth we have substituted a facile idea of sincerity.

I remember when Obama was elected president. At that time I really had very little interest in politics. I did not vote for Obama and I did not think he would be good for the country, but I was interested in listening to his inaugural speech and I thought it was okay.

But the thing about politicians is this: you can’t believe them. What transpired the next eight years had very little to do with “hope and change.” It had more to do with exacerbating and reinvigorating racism that had been declining since the days of Martin Luther King and the civil rights movement.

I was still not that interested in politics when I voted for Donald J. Trump in 2016. After he won, I remember thinking, well, we’ll just see. I liked what he had to say, but being used to political speeches and politicians, I figured he’d be like all the rest: lots of talk and no action. Boy, was I wrong. That was the first thing that impressed me about Trump: he did or tried to do exactly what he said he was going to do. In the political world that is a novel approach. That’s one of the reasons so many of us liked Trump and then I began following politics like I never have before.

I didn’t listen to Obama’s Stanford speech on April 21, 2022, I read it yesterday(opens new window). I have a hard time listening to that man after what he did to our country both during his presidency and during Trump’s presidency. Like his inaugural speech there were some things that sounded good and reasonable. However, what I know now, far more strongly than I have ever known before, is that you can never trust politicians, particularly politicians on the left, more to the point: Democrats. Never trust or believe what they say. It means nothing. The same goes for deep state Republicans (RINOs) who are really just Democrats in sheep’s clothing.

Continue reading here...
Although Obama may have sounded at times like he is for democracy with a statement like this at the end of his speech:

And I believe we should use every tool at our disposal to secure our greatest gift: a government of, by, for the people, for generations to come. And I hope you agree with me, and I look forward to you joining in the work.

One only has to read the other things he said to see his attack on those of us who believe in the free discourse of ideas. His comments about election fraud show how terribly scared the left is that our efforts regarding the stolen election have not slowed down, but have increased. Most Republicans and a large percentage of Democrats and Independents think the election was stolen. You’d think maybe Obama could acknowledge that as a healthy aspect of democracy after saying something like this:

It starts with breaking through our information bubbles. Look, I understand that there are a whole bunch of people in this country who have views diametrically opposed to mine. I promise, they tell me all the time. I get it.

No, he doesn’t get it. He’s just trying to assure us he’s really an open and tolerant guy, when the reality is he’s the opposite. For Obama there are clearly some ideas where only one view is allowed. In the past it was climate change, but now we can add election fraud and Covid. If we do not fall in line on these issues, we have been swayed by misinformation. Listen to Obama on the vaccines:

Take Covid. The fact that scientists developed safe, effective vaccines in record time is an unbelievable achievement. And yet despite the fact that we’ve now, essentially clinically tested the vaccine on billions of people worldwide, around 1 in 5 Americans is still willing to put themselves at risk and put their families at risk rather than get vaccinated. People are dying because of misinformation.

Yes, yes they are. They were told the vaccine was “safe and effective” and guess what? It’s not. The vaccines are killing and maiming people. Is he not aware of the recent Pfizer document dump? The misinformation is coming from the left. Then Obama says this on election fraud:

Right here, in the United States of America, we just saw a sitting president deny the clear results of an election…

This should be applauded, right? Free speech, differences of opinion, “breaking through our information bubbles,” these are good things, right? Let’s sort this out in the courts and in the court of public opinion. If someone strongly believes something, why shouldn’t they say it? This is America, right?

Here’s what troubles Obama and the left: millions upon millions of us agree with Trump.  We have not let this go, nor are we ever going to let it go. What the left wanted after stealing the election was for Trump to concede and ride off into the sunset, while conservatives thought to themselves, “Oh well, we’ll get ’em next time. Rats!”

But that’s not what we’re doing and it scares the hell out of them. What we’re doing is not spending our time with ad hominem arguments, we’ve actually dug into the data and are working hard to expose the fraud despite little cooperation from either Democrats or RINO Republicans. That’s why Obama had to mention Steve Bannon. Bannon understands that the way we win is through grassroots participation from regular people, a kind of conservative activism and Bannon and the guests on his show are leading that movement. But according to Obama democracy won’t work if we are skeptical of the election:

…but if the vast majority of elected Republican officials keep insisting that there’s nothing wrong with saying an election was stolen without a shred of evidence, when they know better, this isn’t going to work.

Without a “shred of evidence”? That is an outright lie. It’s all so tiresome and predictable. Listen to the fear in this statement:

And yet today, as we speak, a majority of Republicans still insist that President Biden’s victory was not legitimate. That’s a lot of people.

It is a lot of people, you’re damn right. But Barry, you just said:

We’ll have to reform our political institutions in ways that allow people to be heard and give them real agency.

We were given no “real agency” after the elections. MSM would not cover the hearings and would only say “there was no evidence,” a talking point, apparently, still being used. We were all told to simply accept the results when many of us could not after what we saw transpire in the early morning hours of November 4, 2020. The fraud was obvious. Well, now we’re being heard and guess what? We don’t agree with the lie that this was the most secure election in history. We believe we have proven that it was not and that the election was stolen and that Biden is an illegitimate President. Put both sides out there and let the people decide. We’re close to decertifying in a couple of states. But that’s how democracy is supposed to work, right, Barry?

Once they [people] lose trust in their leaders, in mainstream media, in political institutions, in each other, in the possibility of truth, the game’s won.

Obama knows this has already happened. We have lost that trust. Millions of us. Not just here in the U.S. but around the world. Obama and his ilk are a big part of the reason why. We do not trust the mainstream media, we know that it is propaganda. We don’t trust political institutions, we know they are corrupt. Oh yes, that trust is long gone, I don’t know if we can ever get that back.

But where Obama is wrong is that not only do we still believe in the possibility of truth, we know that there is truth. That is what we are pursuing and that is what millions of us are fighting for with a vengeance.

Is the game already won? Not yet, but it will be. 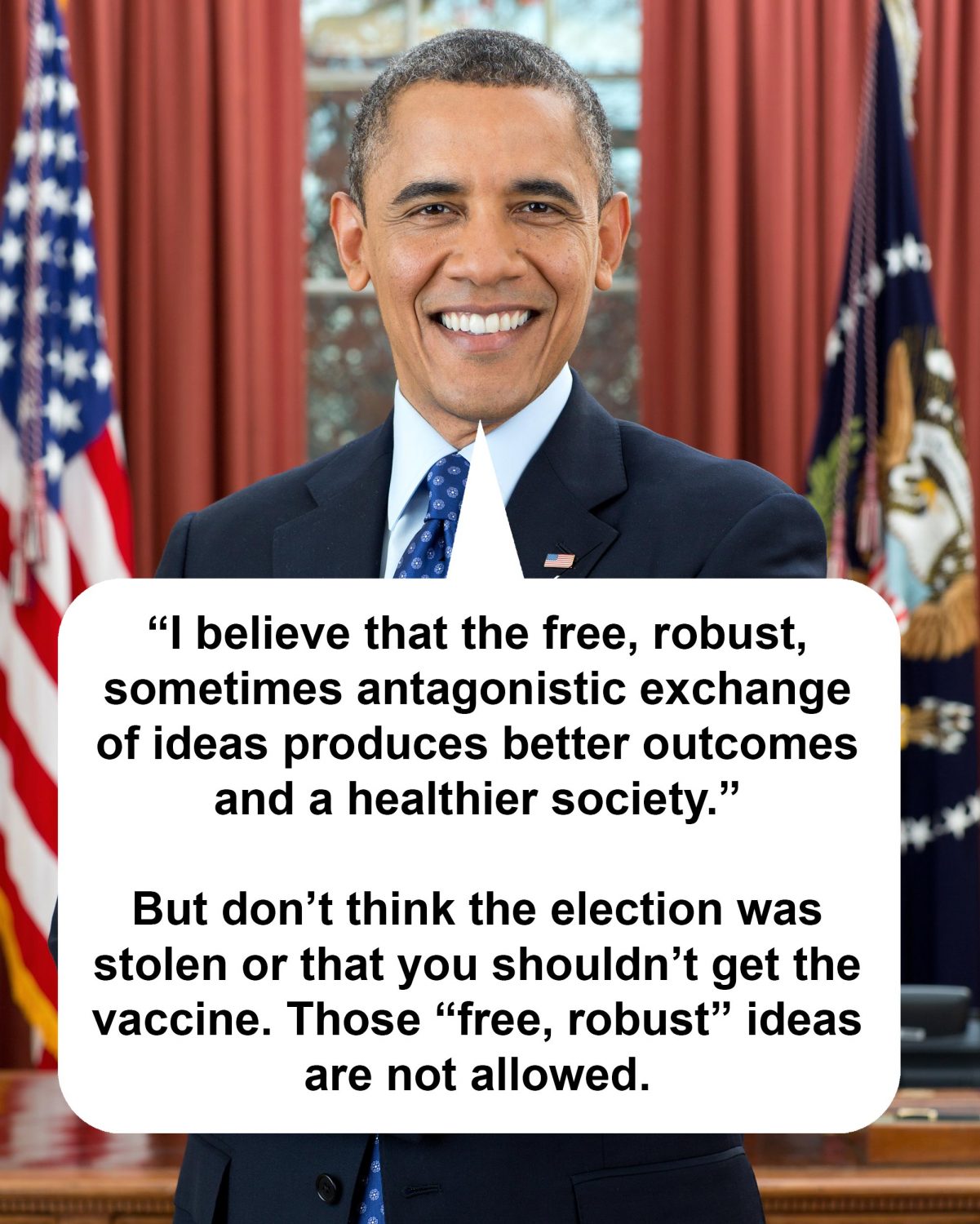 “I believe that the free, robust, sometimes antagonistic exchange of ideas produces better outcomes and a healthier society.”

But don’t think the election was stolen or that you shouldn’t get the vaccine. Those “free, robust” ideas are not allowed.