Opinion is a flitting thing,
But Truth, outlasts the Sun—
If then we cannot own them both—
Possess the oldest one— 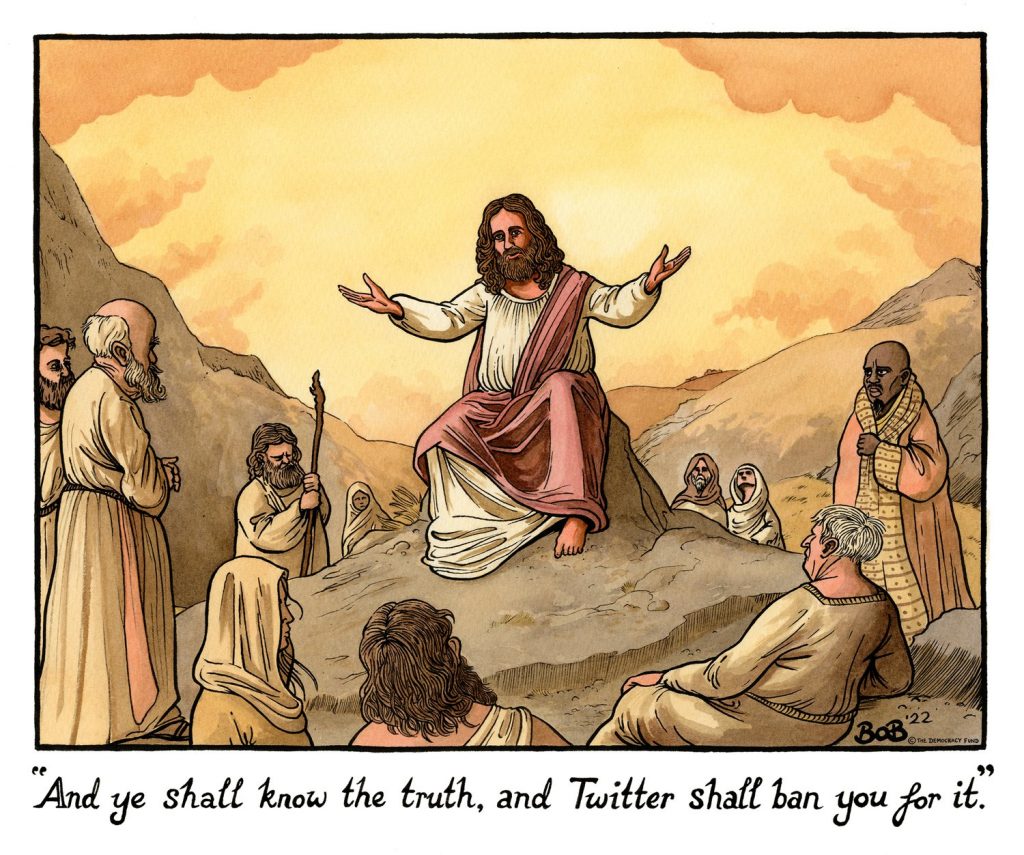 Know the Truth by Bob Moran. Used by permission. View or Buy Print.

I have a friend who calls himself a moderate. For him the truth is always somewhere in the middle. My sense is that that is how he determines what to think on almost any political issue. In his view being a moderate allows one to be unbiased and to more fully engage in civil debate because it is a balanced position that can, by virtue of splitting the distance between the two extremes of left and right, grasp the truth in a way that extremists like myself and my leftist counterparts cannot.

Apparently a convention of moderates would be able to solve all our problems as long they kept all those right and left extreme views out of the equation. The reality is that anyone of any persuasion can have a civil debate with someone who holds opposing views. The problem we have today is that the left-controlled Mainstream Media (MSM) does not allow debate. There are some topics that are off limits if they do not follow the MSM accepted narrative: election fraud, vaccine adverse effects and anything negative about Ukraine.

There’s nothing wrong with being a moderate, well, unless you’re wrong about something. The same goes for being a righty or a lefty. My position with my friend, and I’ve said this to him on several occasions, is that the labels are irrelevant, what matters is the actual truth. What is true? What are the facts? If the truth mostly falls in line with conservative thinking, then so be it. If not, then so be it.

Continue reading here...
For example, with the election of 2020, my view is that it was 100% stolen. I think the facts prove this beyond a shadow of a doubt. My friend’s view is that the election was not stolen. One of us is wrong. Curiously, in this instance, I don’t think he would say the truth is somewhere in the middle. But the point is if the election was stolen it doesn’t matter whether you’re a conservative, a liberal or a moderate or some dude hiking to the North Pole. What matters is what is actually true. Was the election stolen or not? Is Biden an illegitimate President?

We may quibble and argue about whether or not one can actually know with certainty that the election was stolen, but the point of the argument will not be to prove how conservative one is or how moderate one is, the point will be to discern what is true. The truth may align with Donald Trump or it may align with Joe Biden. Who cares? The truth is not determined by either one of those men or by ardently pursuing the middle ground or any other ground. The truth stands alone outside our political affiliations and biases.

In today’s world determining the truth can be a challenge. I don’t think you can find it watching, as my Dad called it, the boob tube. What you get there, with a few exceptions, is propaganda. My moderate friend would say the propaganda is equally shared by the left and the right. Sorry, that’s just not true. The left is controlling the MSM narrative at this point. Those of us who do not agree with it are getting our information elsewhere, what is being called the alternate media.

The point of all this? Don’t look for the conservative or the liberal or the moderate viewpoint.

Look for the truth.

I do not think that most people are motivated by a search for truth. — Mattias Desmet