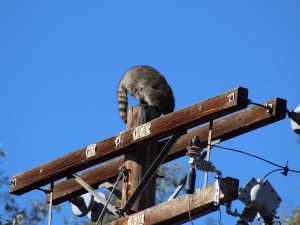 A few days ago my wife noticed a raccoon on the top of a telephone pole outside our neighbor’s property. It was curled up in a small ball at the very top of the pole sleeping in the bright sunlight. Every now and then it would shift a little, find a different position and, apparently, go back to sleep. We watched it all afternoon off and on. At one point some crows tried bothering it, but the raccoon didn’t seem to care or even take notice.

We thought maybe the neighbor’s dogs had seen the raccoon in the evening and giving chase caused the raccoon to seek safety at the top of the pole. We were concerned that the raccoon was stuck and couldn’t get down so we decided to wait to see if it was still there the next day. 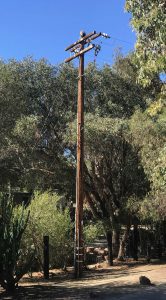 Continue reading here...
We love and enjoy animals. I grew up with all kinds of animals: sheep, goats, cows, chickens, dogs, cats, fish, turtles, lizards, snakes and many exotic birds. Back in the late sixties in San Diego county I purchased a six to twelve inch alligator at the pet store (yup, you could do that then)…an alligator that I ended up being terrified of.

My wife grew up on a dairy farm. Enough said there.

After we got married we got our first dog and once our son came along we had a wide array of animals for him to enjoy: dogs, hamsters, mice, lizards, turtles, chickens and fish.

It’s no fun losing a dog or other pets so my wife and I were a bit worried about the raccoon, especially since he was still there the next day.

I called the power company; I assumed animal control wouldn’t be able to help us because of the power lines. The customer service agent was very helpful (after a 15 minute wait on hold) and scheduled someone to come out. While I was on a walk that morning my wife sent me a link to a website article: Raccoon Stuck Up a Tree or Telephone Pole(opens new window). The article said that raccoons like to sleep in very high places during the day and often, in the city, will sleep on telephone polls. It said they are rarely stuck.

After reading that I began to wonder if calling the power company was a good idea. What if they tried to “save” the raccoon and in the process knocked him off his kingly throne to the ground? I decided I’d talk to them when they came and suggest that we would check on the raccoon during the night to see if it was coming down to feed. The raccoon did not look comfortable. Curled up on that small piece of real estate in the middle of the day, right out in the open, 30 feet in the air inches from power lines did not seem like a choice even an animal would make.

The power company never came or even contacted us to find out if the raccoon was okay. That night I went out with a flashlight and binoculars. The first time I checked it was still there, but out on one of the arms of the telephone pole. When I checked about an hour after that—it was gone, nowhere to be seen. The next day it did not come back to those sleeping quarters. We have not seen it since. I suspect the power company had no intention of coming out. I suspect they get a lot of calls like ours.

And Your Point Is….?

You can probably guess. During all our worry and fretting that raccoon never needed or wanted our help. If help had arrived, that raccoon would not have been happy at all. That raccoon was doing exactly what it wanted to do. More than likely my powerful flashlight was bothering it and if it had the mental capacity of a human being it might have been thinking:

“Would you just leave me the hell alone?”

When I think of our current bureaucratic government, those are my sentiments exactly.