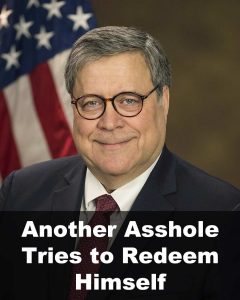 This is a really good article by Emerald Robinson. Barr, like Pence, traitors both, is trying to redeem himself. The election was stolen (it’s obvious) and Barr helped, but now wants all of us to like him again. Sorry, Dude, we will never forget.

President Trump’s Attorney General Bill Barr has been trying to rehabilitate his tarnished reputation in the last month with regular guest appearances on Fox News as he hawks his new book. The mendacity on display has been breathtaking. Never have so many lies been told on television for the sake of selling a bad memoir by an unreliable narrator. Fox News is happy to encourage Barr’s rewriting of history now because Fox News wants the history to be rewritten: both of them got caught colluding with Democrats to throw the election to Joe Biden in 2020 — and nobody trusts them anymore. It’s a perfect marriage of convenience for these grifters.

The problem with Bill Barr’s version of events regarding the laptop is clear to anyone who owns a calendar. Allow me to summarize it in simple terms. Who was the Attorney General when the FBI obtained Hunter Biden’s laptop in 2019, and thus who allowed the FBI to hide it from the public in order to help Joe Biden before the 2020 election? Bill Barr.

Giuliani was unsparing in his assessment of Bill Barr’s character on my show: “The FBI first had access to this information [ i.e. the Hunter Biden laptop] for two and a half years. It deliberately covered it up for a year and a half — and so did phony [Bill] Barr who is making a pathetic fool of himself now. He held back that hard drive for a year and a half when it would have completely cleared the President of the United States. There never would have been an impeachment. He should be ashamed of himself, and he should give up his license to practice law.”

So let’s summarize the recent career of Bill Barr: he stopped U.S. attorneys from investigating voter fraud in 2020; he failed to keep the world’s most infamous pedophile alive for trial; he failed to investigate or authenticate Hunter Biden’s laptop; and he was in charge of the DOJ when the FBI created the Governor Whitmer kidnapping hoax during the Trump Administration. All of these failures go in one direction too: they aided Democrats in defeating a very popular sitting President in favor of a senile man who funnels shady business deals with Chinese communists through his crack-head son.

Very good article. These people think we have short memories. We do not.