My wife has suffered a long illness that we’ve been dealing with off and on for the last 30 years. Some years are okay, others can be hellish. Over the last three decades we have been to countless doctors. It is “we” as at times she could not drive herself and we also like to have two people listening instead of one.

She is not an uninvolved patient. My wife, the more intelligent of the two of us and I’m not being falsely modest it’s just a fact, has done an enormous amount of research trying to heal herself while I have tried to keep our economic ship afloat. Early on we were fairly naive when it came to doctors, but after a few years we began to understand that finding a good doctor is a truly difficult task. We have been to far more bad doctors than good ones.

During the last couple of decades as my wife’s knowledge increased I have noticed two things with doctors (both men and women). When they first start talking to my wife it’s as if they are talking to a child or more likely a typical patient who sees the doctor as the all-knowing savior. My wife patiently listens and then begins answering and asking questions. The first thing that happens (I have seen this countless times) is that it dawns on the doctor that he/she is not dealing with a typical patient. My wife understands all the jargon, knows about specific prescription drugs, available lab tests, vitamins and treatments, asks very intelligent questions and listens intently.

Continue reading here...
Then one of two things happen. Some doctors are threatened by this. It becomes kind of a battle of the doctor asserting just how much more he or she knows than my wife forgetting about the issue of my wife’s illness which suddenly takes a back seat to doctor ego. It’s never stated explicitly but sometimes the attitude is “How dare you try to tell me something. I’m the doctor.” My wife is very tactful, far more than I am, but persistent and unemotional during these bouts. She’s a small, thin, attractive woman and has a frailness about her that I think causes doctors to misjudge her initially.

But the second thing that can happen, and it happens with good doctors so it is infrequent, is that I can see the doctor’s face almost say, “All right! This is an involved, intelligent patient. I can ask her questions and get good answers maybe together we can figure this out.”

The best doctors are willing to say when asked a difficult question, “You know, I don’t know. I’ll look into that.” Or they might actually say to my wife, “That’s a great point, I never thought of that.” But it’s a back-and-forth relationship, because with good doctors my wife also gains information she did not know. We understand now as we didn’t early on, that ultimately it is up to us to figure this out. We need help for sure, but good help.

The very best doctors are willing to think outside their proverbial boxes. Many doctors have a particular protocol they follow for diseases/ailments/etc and I would even call some of these doctors good doctors, but once their chosen protocols don’t work, they have a very hard time moving into an area beyond that. I get it. There often comes a point where it becomes apparent they have given up or we just realize this is not going to work. Some of these doctors definitely helped my wife, but could never help get her to the next level.

When we first go to a doctor here’s what we’re looking for:

During the last couple of years it has gotten even more complicated because of the vaccines. We’ve made the decision that we will not see a doctor who still thinks the vaccines are safe and effective or at least says so, regardless of what they actually think. We have been fortunate to find a doctor who thinks like we do. He’s informed, willing to listen to my wife, and passionate about his profession.

He has seen so much harm caused by these vaccines that I find it hard to believe that any other doctor is not seeing the same thing. This means most doctors are not willing to speak out about it. It’s like we’re living in Germany in the 1930s. Our doctor has said he knows other doctors who have told him they don’t want to speak out. Our doctor has spoken out on social media and joked he may not be a doctor much longer. If the new doctor censorship bill gets passed in California that’s a very likely possibility for him.

This becomes a huge issue. If doctors respect the gag orders (that is essentially what they are) imposed on them by medical boards and down the line state and federal laws, how can we trust them? The vast majority of them we will not be able to trust. More than that it calls into question the moral integrity of the doctors who would prefer their jobs, incomes and prestige over the health of their patients. Their silence is loud and clear. Where are all these doctors who ostensibly believe in the hippocratic oath? Why aren’t doctors stepping forward, publicly stepping forward in mass to support Dr. Malone, Dr. Corey and many others in their profession who are bearing the brunt of this battle?

One of the best ways I have found to summarize this is that unless someone is willing to suffer to abide by their ethical principles, their specific ethics are relatively meaningless, and are simply arbitrary ideals being chosen for convenience.

I ask again, where have all the doctors gone? 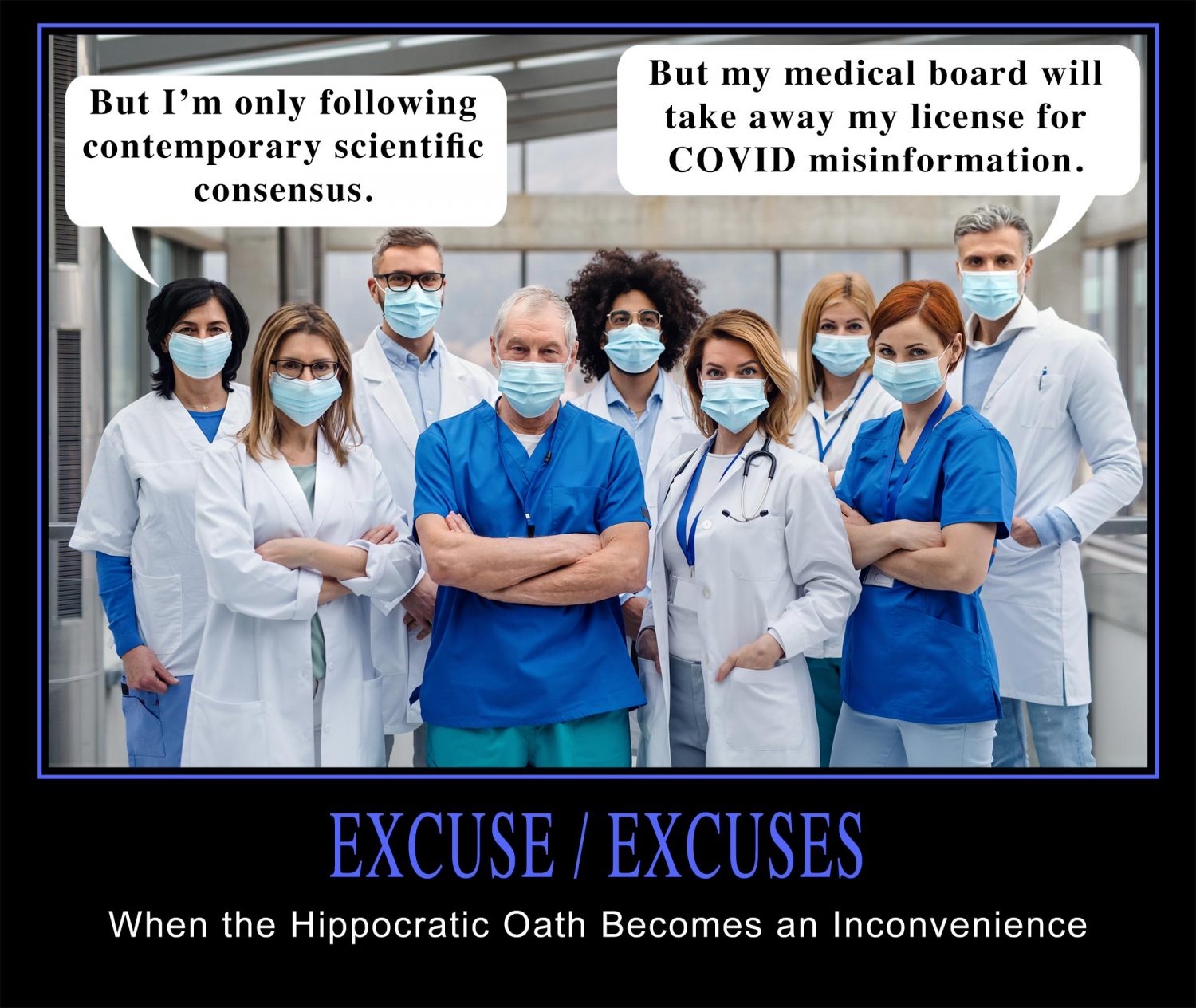 But my medical board will take away my license for COVID misinformation.

When the Hippocratic Oath Becomes an Inconvenience