Blaze Media first broke this story and Emerald Robinson, previously of NewsMax, has written an excellent piece. This paragraph from Blaze Media lays it out:

In response to a FOIA request filed by TheBlaze, HHS revealed that it purchased advertising from major news networks including ABC, CBS, and NBC, as well as cable TV news stations Fox News, CNN, and MSNBC, legacy media publications including the New York Post, the Los Angeles Times, and the Washington Post, digital media companies like BuzzFeed News and Newsmax, and hundreds of local newspapers and TV stations. These outlets were collectively responsible for publishing countless articles and video segments regarding the vaccine that were nearly uniformly positive about the vaccine in terms of both its efficacy and safety. [emphasis mine] 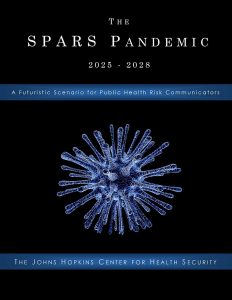 It’s kind of like war games for a pandemic, but specifically, as stated in the disclaimer, it is

…designed to illustrate the public health risk communication challenges that could potentially emerge during a naturally occurring infectious disease outbreak requiring development and distribution of novel and/or investigational drugs, vaccines, therapeutics, or other medical countermeasures. [emphasis mine]

Sound familiar? Alex Jones reported on this quite a while ago which is where I first heard about the report. I assume the “communication challenges” of propaganda can be difficult to coordinate trying to make sure that the media and the government are all on the same page. Probably need a good spreadsheet, fairly extensive email list and a big budget.

There are some disturbing, prophetic (in the loosest sense of that word) passages in this document.

The contract included requirements for safety testing, ensuring the vaccine would be safe and effective for human use. It also provided considerable funding from the National Institutes of Health (NIH) and included provisions for priority review by the FDA. Additionally, HHS Secretary Nagel agreed in principle to invoke the Public Readiness and Emergency Preparedness Act (PREP Act), thereby providing liability protection for CynBio and future vaccine providers in the event that vaccine recipients experienced any adverse effects. [emphasis mine]

4) What are the potential consequences of health officials over-reassuring the public about the potential risks of a novel SPARS [the fictional virus] vaccine when long-term effects are not yet known?

I guess now we know. The medical establishment and government health agencies have lost all credibility and I don’t realistically see how they can gain any of it back in the near future. I wouldn’t call it “over-reassuring”, I’d call it something simpler and more direct: lying. That assessment is being substantiated more and more particularly with the revelation that the CDC withheld data from us and the recent release of 160 Pfizer documents (55,000 pages). These are the documents that the CDC and Pfizer did not want released for another 75 years. Red flags, anyone?

On page 55 of “The SPARS Pandemic” there is this:

This advertisement campaign required government officials to leverage relationships in the information technology industry, including the many companies involved with social media, but the impact was worth the effort. Vaccination rates eventually began increasing across all targeted demographics except the most recalcitrant anti-vaccine activists.

Leverage? Yes, I guess that is what happened. The leverage was money. I do wonder if the real marketing campaign in the here and now was not as successful as they hoped. There are a lot of us who did not get vaccinated and as with anything the government tells us these days why would I believe their numbers on this? My guess is they inflated vaccinated numbers to persuade more people to get vaccinated.

In Chapter 18, “Acknowledging Loss”, on page 63 there is this quote spoken by the fictional Dr. Flynn:

“Communities around the country went through what some felt was a harrowing public health emergency, only later to confront the possibility, however slim, that the medicine we promised would help them may in fact be hurting them.” [emphasis mine]

In that fictional world, a slim possibility, in our real world, not so slim. I remember Alex Jones, who gains more and more credibility the longer this goes on, saying that the document basically showed us their plan. At the time I remember thinking that seemed a little out there. A lot of us owe Alex Jones an apology. In the “Food for Thought” section after the above quote we read this on page 65:

1) Given the uncertain long-term safety profile of the Corovax vaccine, why are both science and sympathy necessary when communicating about a possible correlation between vaccination and adverse events?

I’d advise the government, the CDC, the FDA and their willing participants in the press to dispense with sympathy because we’re not interested. We wouldn’t believe you anyway. Guaranteed. Nor will we ever forget what you did. Guaranteed.

Here’s some advice with not even a hint of sympathy: secure yourselves some good attorneys.

As censorship increases also consider using email and text messages to send links.
« Is Klaus Schwab the Most Dangerous Man in the World? The Curtain Close on COVID Theater »