One thing to always keep in mind about politicians and elites, as my son reminds me, is that they’re no brighter than the rest of us. They would certainly like us to think they’re smarter, more creative, more intelligent, but they’re not. It’s why they have to call themselves “experts” and tell us to follow the “science.” Words are powerful and big words that sound like they actually mean something when they don’t can be powerful if the masses are taken in by them.

But it’s all smoke and mirrors. Justin Hitler Trudeau is a prime example of incompetence. The foundation of a country’s infrastructure is dependent on trucking. Who does Trudeau piss off? The truckers, of course. What is he doing now? He’s doubling and tripling down. Early on he said this:

The small fringe minority of people who are on their way to Ottawa who are holding unacceptable views that they are expressing do not represent the views of Canadians who have been there for each other, who know that following the science and stepping up to protect each other is the best way to continue to ensure our freedoms, our rights, our values, as a country. [emphasis mine]

In midst of many countries dropping various restrictions while blue states in the U.S. are also doing the same (for political reasons only), Trudeau refuses to even talk to the people he supposedly represents. He continues to insult them.

Today in the House, Members of Parliament unanimously condemned the antisemitism, Islamophobia, anti-Black racism, homophobia, and transphobia that we’ve seen on display in Ottawa over the past number of days. Together, let’s keep working to make Canada more inclusive. [emphasis mine]

Really? What world is he living in? Does anyone on his staff watch live feeds? Has anyone gone down to be in the midst of the protesters? We all know the world he’s living in, it’s one of propaganda and out right lies to push a political agenda. Go watch Viva Frei on youtube to see just how evil these people are.

And then, one of my favorite statements by Justin Hitler Trudeau:

Canadians have the right to protest, to disagree with their government, and to make their voices heard. We’ll always protect that right. But let’s be clear: They don’t have the right to blockade our economy, or our democracy, or our fellow citizens’ daily lives. It has to stop.

Ah, the irony. What has Canada, the U.S. and the rest of the world been doing to its citizens for the last two years? Enough is enough.

But it’s okay. Justin Hitler Trudeau‘s incompetence is fueling a freedom movement like we’ve never seen before. Everything he has done to this point is stoking the fires of freedom across the entire world. I’ll bet his globalist handlers are happy about that.

No one saw this coming and it is awesome! Hold the line everyone! 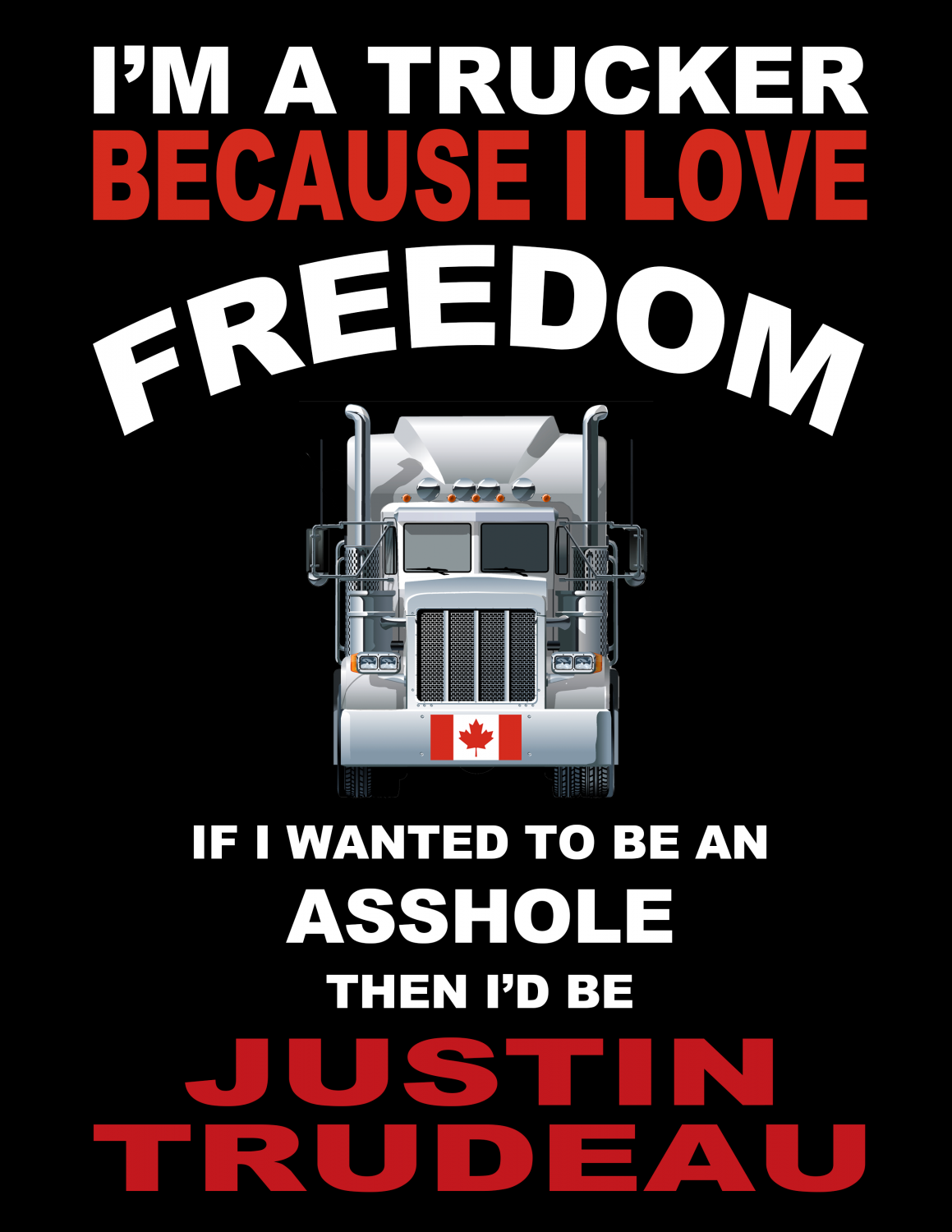 I’m a trucker because I love freedom.

If I wanted to be an asshole I’d be Justin Trudeau.