Just as media corporations re-branded their partisan pundits as "fact-checkers" -- to masquerade their opinions as elevated, apolitical authoritative, decrees of expertise -- the term "disinformation expert" is designed to disguise ideological views on behalf of state and corporate power centers as Official Truth. 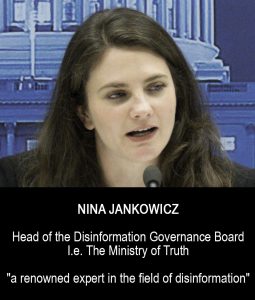 The left is getting desperate and they are going to attempt all kinds of things before the mid-term elections. If the elections are fair, the left will lose miserably in a landslide. They know this. They know we know this. They are in a corner. They will do just about anything to keep their power.

The title of this blog comes from Glenn Greenwald’s article(opens new window) on his substack. The subtitle is:

The power to decree what is “disinformation” now determines what can and cannot be discussed on the internet. It is now in the hands of trained disinformation agents of the U.S. Security State.

Disinformation at Its Worst

Greenwald’s first paragraph is about the Biden laptop. I remember thinking, when the news first broke, Biden is done. How wrong I was! Greenwald writes:

The most egregious and blatant official disinformation campaign in the U.S. took place three weeks before the 2020 presidential election. That was when dozens of former intelligence officials purported to believe that authentic emails regarding Joe Biden’s activities in China and Ukraine, reported by The New York Post, were “Russian disinformation.” That quasi-official proclamation enabled liberal corporate media outlets to uncritically mock and then ignore those emails as “Russian disinformation,” and pressured Big Tech platforms such as Facebook and Twitter to censor the reporting at exactly the time Americans were preparing to decide who would be the next U.S. president.

Later in the article Greenwald explains the importance of the term “disinformation” for the ruling class:

This same strategic motive — to vest accusations of “disinformation” with the veneer of expertise — is what has fostered a new, very well-financed industry heralding itself as composed of “anti-disinformation” scholars. Knowing that Americans are inculcated from childhood to believe that censorship is nefarious — that it is the hallmark of tyranny — those who wish to censor need to find some ennobling rationale to justify it and disguise what it is.

I recommend the article. The full version is available for paid subscribers, but even the free version is worth the read.