One of the the reasons I’m looking into civil disobedience is because I’ve never thought about it in terms of “I may really have to do this” before now. My two previous blogs about it are: Freedom From Fear by Aung San Suu Kyi and Live Not By Lies by Aleksandr Solzhenitsyn. The only civil disobedience I have ever engaged in was not wearing a mask some months back when it was required. In some cases not getting vaccinated is a form of civil disobedience, but, at least for me, it has never been a requirement.

So, to put it mildly, I have, for all practical purposes, no civil disobedience experience. None. I want to be prepared when or if it becomes necessary to thwart the law when it may have far more serious consequences than feeling uncomfortable when the Costco employee asks me to put a mask on. I also want to be in the “I will not comply” mindset if or when the time comes. That is, I want to have already made the decision on what I’m going to do, not try to decide at the time. 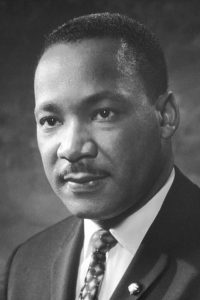 As I’ve written in the previous essays I’ve always been a person to follow the law, so breaking any law, any rule feels bad to me in visceral sort of way. I got over that to some degree not wearing a mask when everyone around me was.

This essay by King was actually a speech he gave in 1961. He’s very impressed by the students engaging in civil disobedience. Near the beginning he says:

If the Negro stayed in his place and accepted discrimination and segregation, there would be no crisis. But the Negro has a new sense of dignity, a new self-respect and new determination.

The same could be said for us now. If we all obey the unlawful laws that may be coming or are already here and choose only to lament our circumstances and not fight back, there will be no crisis. There needs to be a crisis. King points out, these people in power are not going to give it up easily and “very seldom do it voluntarily.”

As both Suu Kyi and Solzhenitsyn emphasized, King says that violence to achieve our ends must never be used. Desmet in his book, The Psychology of Totalitarianism, says the same thing. King then goes into the methods used by the student movement in the south. I’ve tried to pull out these main points. Here they are:

When we see so many individuals who have betrayed us, I find number three the most difficult to accept. Desmet does make the point that getting rid of these individuals most likely will do little good as the totalitarian system itself is partly responsible for them and will go on without them, but I want them to be punished for what they have done in addition to dismantling the system.

I like the last point of a “future bringing into being something real and meaningful.” This is what we’re after. This is what they are trying to take from us. King finishes the speech with these inspiring words:

And we shall. Amen and amen.