This metaphorical use of light is another device used by all great Platonic humanists to convey the image of different grades of knowledge as outlined in the famous Allegory of the Cave in Plato’s Republic.

This is a very good article by Matthew Ehret and very appropriate for today (the celebration of the Resurrection) and today (the world we find ourselves in). I recommend the full article(opens new window). Here are some highlights:

Today, the world finds itself moving through a turbulent transformation between two systems. Collapsing at a faster rate every day are the foundations of a failed imperial world order defined by zero-sum thinking, consumerism and materialism which has defined our existence for decades. The question is now: will the new world system take the form of a new era of global empire, unmitigated war between faiths and a prolonged dark age OR might it take the form of the beautiful multi-polar world order defined by win-win cooperation between all of the nations, faiths and cultures of the world?

The Dinner at Emmaus

Featured in the New Testament Gospels of Luke and Mark, Jesus is invited to eat with two of his disciples (Luke and Cleopas) in the town of Emmaus. This wouldn’t be anything exceptional, except for the fact that Jesus had been violently crucified on the cross and entombed days earlier. Neither Luke nor Cleopas recognize their mentor who has been resurrected after being entombed for three days and it is only upon breaking bread with this stranger that they make their discovery just as Christ vanishes miraculously into light.

Whether you are a Christian, Muslim, Jew, Confucian, Hindu, Buddhist or other, the lesson conveyed by this biblical story and especially Rembrandt’s artistic treatment has a universal value for the simple reason that Christ’s life and mission represented a moral power of change which had the unique capacity to undo the foundations of the Roman Empire. This movement accomplished this miraculous feat not through military force, money or any other Hobbesian notion of power, but merely by tuning the hearts and minds of a suppressed people to the power of forgiveness, loving all including one’s enemies, and adhering to one’s conscience before all “political norms of acceptable behaviour” demanded by the Roman oligarchy.

Rembrandt’s 1628 rendition of ‘Supper at Emmaus’ is featured below with an incredible use of chiaroscuro to convey the divinity of Christ and also the motion from the darkness of ignorance to the light of knowledge. Rembrandt’s choice to place the central focus on the un-named disciple rather than on Christ whom he places in a foreground silhouette is not an accident and neither is the choice to place the maid working in the kitchen covered in shadow and oblivious to the miracle behind her. This central focus on the discovery process occurring in the mind of the disciple creates an opportunity for a cathartic experience with the viewer who is invited to share in the co-discovery occurring before their eyes. 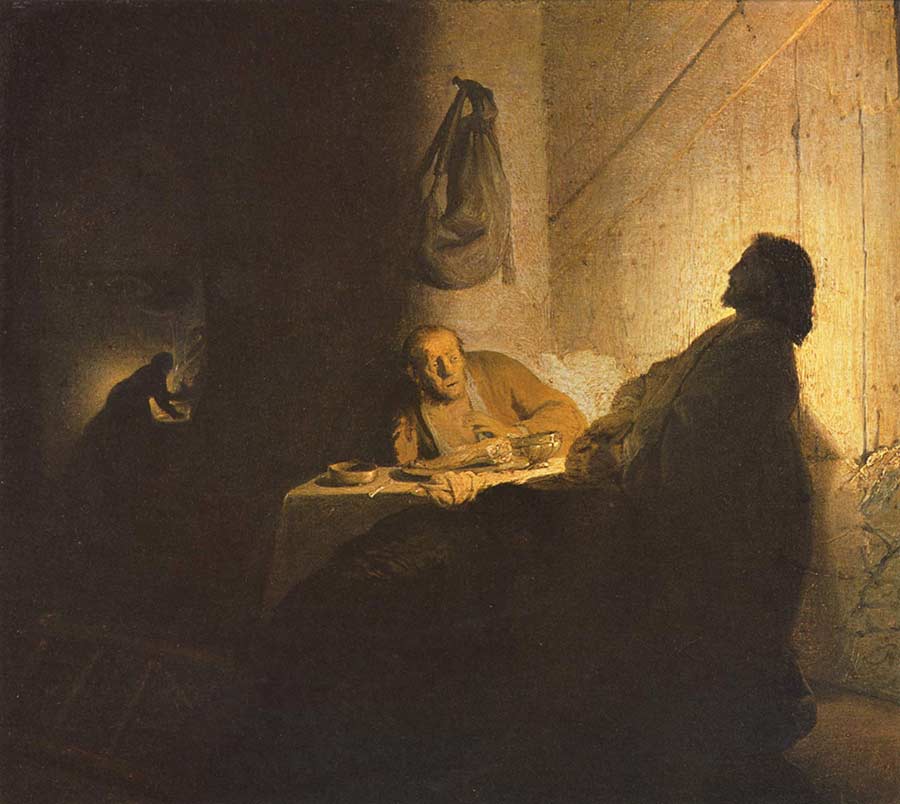 We hope that during this Easter Sunday and all of the days to follow, you dear reader, take the time to seek the power of creative love and faith in a better world within yourself while sharing the fruits of that search with others. Perhaps, in so doing the lives of such great souls as Velasquez, Rembrandt, Confucius, Socrates, and Christ may come alive once more.