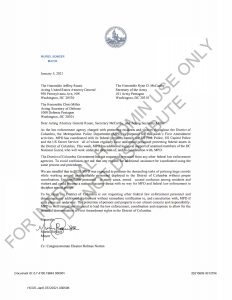 All emphasis is mine.

As the law enforcement agency charged with protecting residents and visitors throughout the District of Columbia, the Metropolitan Police Department (MPD) is prepared for this week’s First Amendment activities. MPD has coordinated with its federal partner, namely the US Park Police, US Capitol Police and the US Secret Service all of whom regularly have uniformed personnel protecting federal assets in the District of Columbia. This week, MPD has additional logistical support of unarmed members of the DC National Guard, who will work under the direction of, and in coordination with, MPD.

The District of Columbia Government has not requested personnel from any other federal law enforcement agencies. To avoid confusion, we ask that any request for additional assistance be coordinated using the same process and procedures.

We are mindful that in 2020, MPD was expected to perform the demanding tasks of policing large crowds while working around unidentifiable personnel deployed in the District of Columbia without proper coordination. Unidentifiable personnel in many cases, armed caused confusion among residents and visitors and could become a national security threat with no way for MPD and federal law enforcement to decipher armed groups.

To be clear, the District of Columbia is not requesting other federal law enforcement personnel and discourages any additional deployment without immediate notification to, and consultation with, MPD if such plans are underway. The protection of persons and property is our utmost concern and responsibility. MPD is well trained and, prepared to lead the law enforcement, coordination and response to allow for the peaceful demonstration of First Amendment rights in the District of Columbia.