So I wrote my state senator, Brian Jones, to find out where he stands on California AB Bill 2098, the censorship bill. I did this because I receive his newsletter and have noticed that the newsletter stays away from the only topics that I’m really interested in at the moment: the draconian COVID bills making their way through our California legislature.

I decided to go to his website and true to form there was no good information about these bills there either. I did some searching on the internet and found an interview he did with the San Diego Union, our paper here in San Diego County that I have not read regularly for decades. I learned there that he is unvaccinated, but what I noticed about the interview was his defensiveness. Republicans still have not learned from Trump. One of the reasons we like Trump is that he doesn’t back down and is not defensive of the stances he takes, instead he owns them.

If you’re against abortion, say so. If you think the vaccines are not “safe and effective”…say so! Republicans and conservatives have to learn to play offense. You will never win if you only play defense.

Continue reading here...
Senator Jones, from my letter, knew exactly where I stood on the bill. I can’t remember if I said I was a Republican or not, or if I said I was a conservative, but even knowing I was against the bill he was incapable of answering either way. Here’s the letter in full: 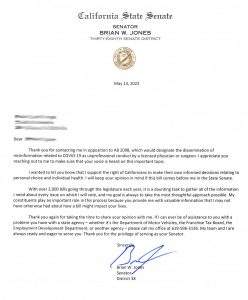 Thank you for contacting me in opposition to AB 2098, which would designate the dissemination of misinformation related to COVID-19 as unprofessional conduct by a licensed physician or surgeon. I appreciate you reaching out to me to make sure that your voice is heard on this important topic.

I wanted to let you know that I support the right of Californians to make their own informed decisions relating to personal choice and individual health. I will keep your opinion in mind if this bill comes before me in the State Senate.

With over 2,000 bills going through the legislature each year, it is a daunting task to gather all of the information I need about every issue on which I will vote, and my goal is always to take the most thoughtful approach possible. My constituents play an important role in this process because you provide me with valuable information that I may not have otherwise had about how a bill might impact your lives.

Thank you again for taking the time to share your opinion with me. If I can ever be of assistance to you with a problem you have with a state agency — whether it’s the Department of Motor Vehicles, the Franchise Tax Board, the Employment Development Department. or another agency — please call my office at 619-596-3136. My team and I are always ready and eager to serve you. Thank you for the privilege of serving as your Senator.

All he does in reference to the bill is explain to me what it is and since I already told him that I was opposed to it…the assumption should have been that I know what it is. Now to be fair, this was probably a form letter as it is careful to explain I can contact his office if I need help with any of the things that I freaking care NOTHING about. That’s fair on my part, but it doesn’t help his case at all. What’s his case? That he is just like most of the rest of them: a typical politician trying to stay as middle of road as possible and in the process is incapable of saying anything meaningful.

If Senator Jones is looking for sympathy because he has so many bills to follow, he’s not going to get it from me. These bills are the most important bills going through the legislature at the moment. If he doesn’t know about them, he’s incompetent and if he does and is unwilling to put his stance in print, he’s disingenuous. Either way California Republican senator Brian Jones needs to be replaced.

Real people. That’s what I want. I just want a real person on the other end of an email, letter or phone call. Even if I disagree with them. But this letter is like talking to a telemarketer: I understand what he’s saying but it doesn’t mean anything.

If I was a California State Senator and received correspondence from a concerned citizen regarding AB 2098 here’s what I would write:

Thank you for your correspondence. Like you, I am vehemently opposed to AB 2098 and do not worry, I will vote and speak against it. I have debated many of my colleagues on the other side of the aisle, unfortunately they seem immovable with regard to anything vaccine related.