Flexible? If you think Fauci is talking about engaging in some stretching exercises maybe it’s time to sell all you own and move to the desert for a few years. Fauci is priming everyone for more lockdowns. This is not about a new variant or keeping everyone safe, it’s about the Great Reset. It’s about owning nothing and being happy about it. People have enough trouble owning something and being happy. The owning nothing scenario only sounds good in sound bites to people with gender studies degrees who are now flipping burgers to get by.

This is about power and control and the sooner everyone, or at least a lot more people figure that out, the better off we’re going to be. Tony (Dr. Death) Fauci said:

We need to be flexible, and if in fact we do see a turnaround and a resurgence, we have to be able to pivot and go back to any degree of mitigation that is commensurate with what the situation is.

See that? “…any degree of mitigation…” Get ready folks, they’re going to do this. They love to make you think it’s all going to go back to normal, just so you can a get a little bit comfortable and then, whamo! More lockdowns. If you know that going in, you won’t be surprised and you can just tell them to go stick their lockdowns into the deepest crevices of their personal space and simply continue to live your life as you always have. It’s your choice, not theirs.

Massive civil disobedience and non-compliance is what what needs to happen. We need participation from lots and lots and lots of people. We’re talking hundreds and thousands and more. Grandmas, grandpas, mothers, fathers and your weird uncle you see only at Thanksgiving. You know, the one who told you for decades that there were a bunch of globalist pedophiles who wanted to take over the world? Spend some more time with that guy, you might learn something.

We can’t just say that ‘we are done now; we’re going to move on.’ We’ve got to be able to be flexible, because we are dealing with a dynamic situation.

Not true, Tony, ol’ buddy. We can easily say it: “We are done now; we’re going to move on.” I just wrote it. When I wrote it, I even said it out loud. I’ll say it out loud again:

What the hell he is talking about? I have no problem saying it, writing it or putting it in big, bold letters. You can say it too. We could even chant it:

I’ll bet we could even make a poem out of it, but I just tried and I can’t come up with anything good, so instead of subjecting you to inferior poetry, I’ll just acknowledge it could be done now, but I need to move on.

And we still have only 65 percent of the total population fully vaccinated. If we want to be able to have a buffer against the possibility of there being a resurgence, there are things that we can do right now about that.

These people are not going to give up on the idea of vaccine mandates. They want everyone vaccinated and on a schedule of infinite boosters. It’s called recurring income or recurring revenue or just bullshit for short. 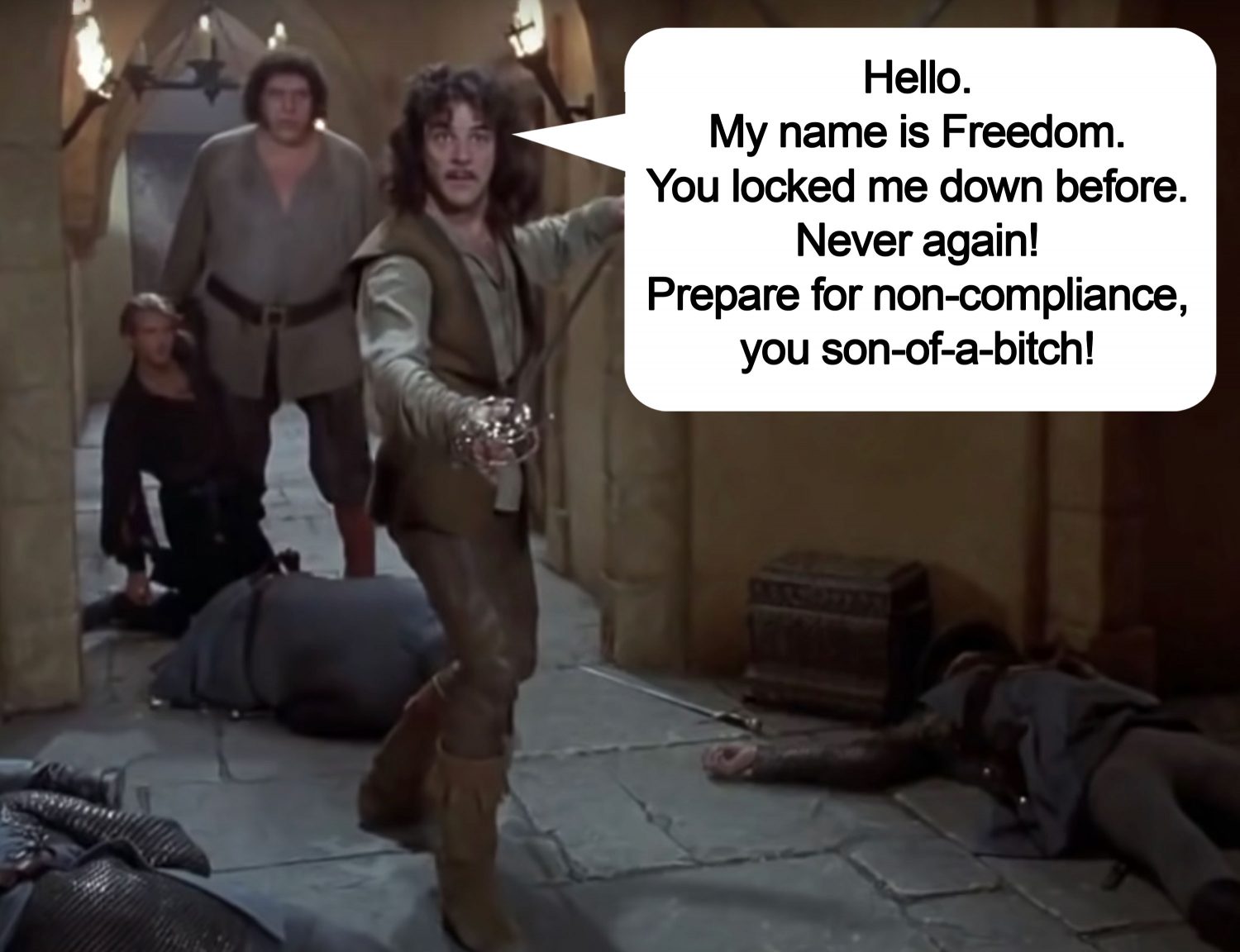 Hello.
My name is Freedom.
You locked me down before.
Never again!
Prepare for non-compliance, you son-of-a-bitch!