The man who thinks with his own mind and keeps it uncorrupted is free. The man who fights for what he thinks is right is free.

I was a delivery guy for 17 years in Downtown San Diego and Coronado. Delivering packages for a living isn’t a bad gig. Most of the time you are on our own with no one looking over your shoulder and you’re always busy, so the day goes quickly, no time to get bored. I spent a lot of time on elevators and the curious thing about wearing a uniform is it almost makes you invisible. I started my delivery career when I was 28 with previous stints as a high school teacher and a candlemaker. So I was not a young man when I was standing on the elevators with attorneys and businessmen and women.

I was sometimes surprised at the conversations people were willing to have in front of me in elevators. Maybe I’m more of a private person and maybe they would have had those conversations regardless of who was standing there, but I did wonder if the uniform established my position as a nobody. I do not use “nobody” in a derogatory sense. I like being a nobody, never wanted to be a somebody, not that there is anything wrong with that, just not my preference.

At a time like this we need somebodies. In no particular order I think of Dr. Robert Malone, Dr. Pierre Kory, Dr. Peter McCullough, Dr. Ryan Cole, Steve Bannon, Dr. Naomi Wolf, Edward Dowd and many, many others I am not naming. I am thankful for these people and what they are doing. Many have lost their careers and their reputations, but they still press on.  However, if we are to win this thing, if we are to successfully fight tyranny it will never happen without a bunch of us nobodies.

The problem is that we are now in a time when it really matters if a lot of people resist all at once. This decision whether or not to speak up makes the difference, when it scales, between freedom or servitude forever.[emphasis mine]

It really does matter. It is all of us nobodies who can and will make the difference. Massive civil disobedience can have a big impact. I’m amazed at how many people have eventually capitulated to vaccine mandates even though they insisted they would not. In a recent interview a firefighter in a small district said there were six holdouts until the night before the mandate went into effect. Of the six, five got the vaccine in order to keep their jobs. Was it worth the risk? I understand wanting to keep your job, but when do we stand up? Tomorrow? Next week? Next month? Maybe next year?

There are people in my family and some of my friends who I thought were against the jab because of conversations we had, but who eventually got it. One person essentially said it would just be easier because they wanted to travel. A man I talked to got the jab because his wife insisted he do so and now he’s been in and out of the hospital with heart problems.

It’s not going to get easier if the globalist agenda keeps progressing. Vaccine mandates may be the least of our worries. What will doctors in California do if AB 2098 (the censorhip bill) passes? Will those who are taking a stand now, stop to comply with the law? If so, as a California citizen, should I have any confidence in the doctors I see here (I have very little now)? If thousands and thousands of California doctors do not stand against this why should I trust any of them?

In some ways it is fairly easy and uncomplicated: don’t wear a mask, speak up when the opportunity is there and get involved using your talents whatever they may be. Be proactive. If a restaurant requires a mask for service, take your business elsewhere. If your employer requires the vaccine to be employed, quit. Have a client that requires employees to be vaccinated? Let them know you will not work with them under those circumstances.

If a large percentage of us do not comply, we can make an impact, if we give in, we leave the few who are resisting hung out to dry. 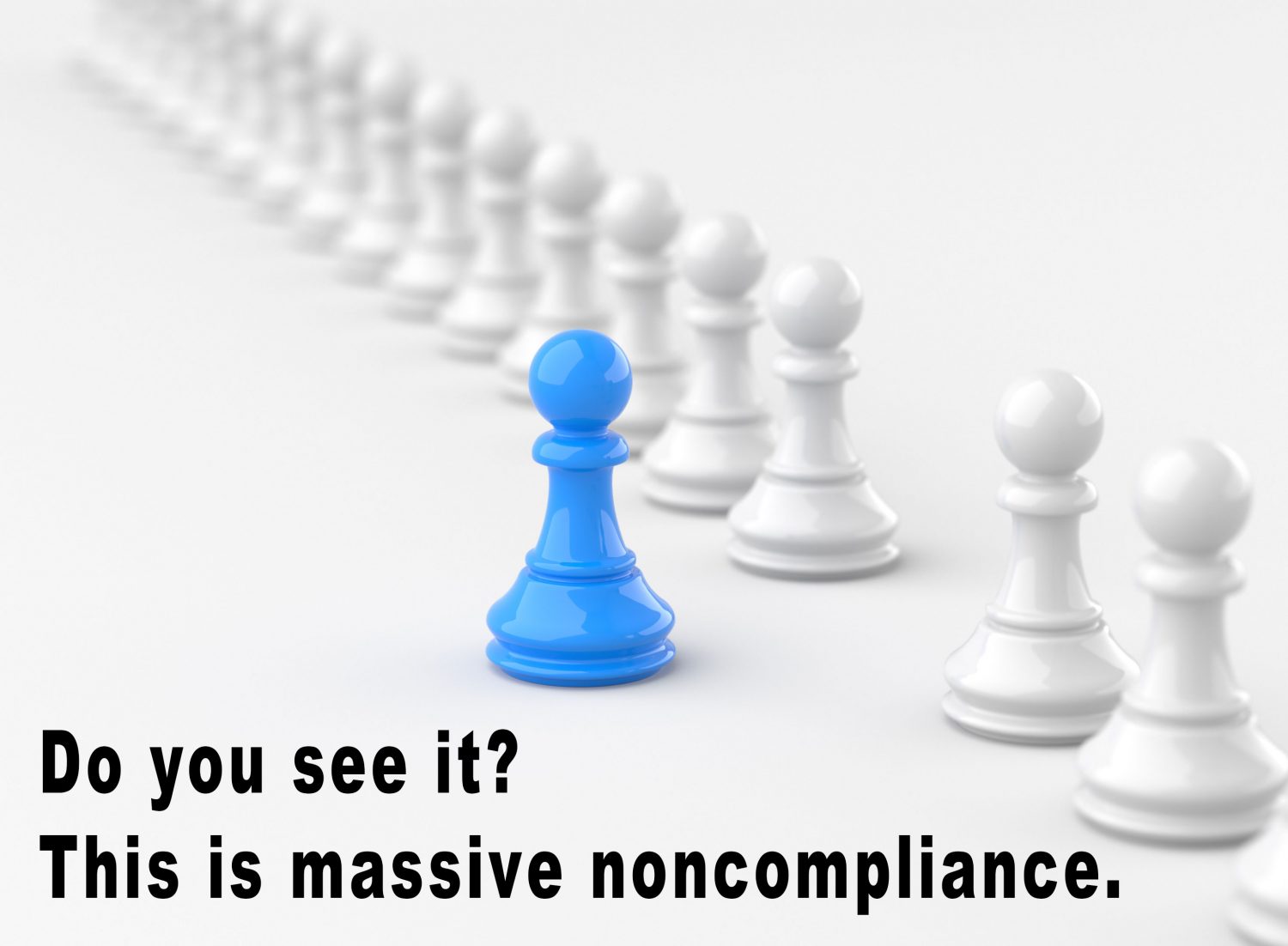 Do you see it?
This is massive noncompliance.